Fungi are the most dominant organisms in the soil. It's easy to forget this when we only see the mushrooms. However, these are only a small part of the vast network of fungi under our feet.
For World Soil Day, I'll be giving you a tour of this secret underground world. And be sure to check out these articles from Fungus Day UK earlier in the year! 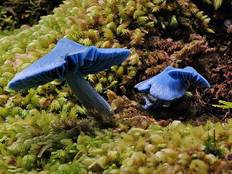 What are mycorrhizal fungi?

Mushrooms are just the fruiting bodies of fungi, a temporary organ that emerges to release its spores and disperse. Under the surface of the soil, there is a huge network of cells, called mycelia, which make up the largest part of the fungi. The mycelia are long filaments, made up of individual thread-shaped cells called hyphae.
Mycelium are located under the soil
The word mycorrhiza originates from Greek ‘myco’ for fungus and ‘rhiza’ for root.
Mycorrhizal fungi are fungi that form symbiotic relationships with the roots of most plants and trees. This mutually beneficial relationship arose 400 million years ago, in the Devonian period. New evidence suggests that these relationships existed even before roots had evolved and were crucial in the colonisation of land.

Through energy and nutrient exchange, this specialised network is integral to the health of the soil and the ecosystem above. It can even determine the nutrient content of the food that we eat.
Mycorrhizal fungi are grouped into two main types: endomycorrhiza, and ectomycorrhiza.
Among the different types, there are various ways in which mycelium connect with plant roots. Some mycelium networks explore the soil away from the plant and carry nutrients back. Others form sheaths around roots (ectomycorrhiza), or penetrate for direct and efficient nutrient exchange (endomycorrhiza).
Not all mycorrhizal fungi fruit above ground, only ectomycorrhiza. The rest grow their fruiting organs underground to release spores.
Only ectomycorrhiza produce mushrooms above ground
Download Candide to your phone to find out more about World Soil Day!

What are their benefits?

The relationship between plants and fungi benefits both parties. Fungi cannot access carbon and plants have limited access to minerals and nutrients, so trade between the two gives strength to both organisms.
Mycorrhizal fungi acquire nutrients from decomposing plant material as well as fractured rock, while plants can photosynthesise sugars which they deliver to fungi in the form of organic carbon.
The fungi secrete digestive enzymes which, with the help of bacteria, can break down substrates. The minerals and nutrients are absorbed into the hyphae and carried to the roots of the plant.
The primary nutrients that fungi deliver to plants are phosphorus and nitrogen, as well as calcium, iron, and zinc. Some mycorrhizas will increase potassium, magnesium, and manganese too.
Another benefit for the plants is the assistance that fungal mycorrhizas bring to facilitate water uptake. In drought conditions, plants are less able to provide the necessary sugars to the fungus, yet the fungus alleviates this by transporting more moisture to the plant.
This relationship is more complicated than we can imagine. Plants can attract microorganisms to their roots to create trade relationships. Fungi can transport water and nutrients between many plant species by connect a hyphae to form a larger network.
We have only recently discovered that plants communicate chemically with one another through root networks, delivering warning messages about pest and disease attacks.
Tips of hyphae under the microscope. Photo: Patrick C. Hickey and Nick D. Read
Mycorrhizal fungi also play a part in holding the soil structure together, on a small particle level. Glycoproteins (called glomalin) are secreted by the fungi, which enable their hyphae to push through the soil. These glycoproteins will stay in the soil, holding the particles together for up to 40 years and helping to reduce soil erosion. It also reduces the amount of bacterial and fungal predators, creating a safe zone for the plant.
One of the most significant benefits glomalin can bring is the long-term storage of carbon.
Up to a third of the biomass in the topsoil of some forests is made up of fungal mycelium. Forests with old trees of different species can host more species of mycorrhizal fungi.
Older trees are often called mother trees, as they nurture their seedlings with nutrients to ensure survival.
Download Candide to your phone to find out more about World Soil Day!

Any disturbance, such as logging can have an untold impact on the underground ecosystem and its ability to recover. It fragments the mycorrhizal network, reducing nutrient exchange between species and breaks up the soil, which can cause the redistribution of harmful soil bacteria.
New tree seedlings will also no longer have the benefits from the mycorrhizal network that their mother tree provided. The oldest trees in forests, therefore, need to be protected from deforestation.
Deforesation can have massive negative effects on underground ecosystems
The same principles can be applied on a smaller scale, in your garden.
If you till only the top 5cm of the soil, you are less likely to disturb the complex network of mycelium beneath. You can also introduce mycorrhizal inoculations into your soil at the time of planting trees and shrubs.
The best practice is to make your own organic garden compost and allow the soil fauna, such as worms to do all the hard work for you. Check out this article on compost to learn more about composting:

Organic matter will help mycorrhizal networks to access and deliver nutrients to your plants, and planting a more diverse range of plants will also encourage greater biodiversity of soil microbes.
A deeper appreciation of mycorrhizal fungal relationships will help us understand them more. We need to consider them a fundamental part of any growing system, and nurturing these organisms should be at the heart of all our soil management.
These networks are one of the greatest unsung heroes of nature, without which it is doubtful whether life on Earth would exist as we know it.

Made from kitchen scraps, compost is well known to gardeners as a rich growth medium to improve soil quality. But the... 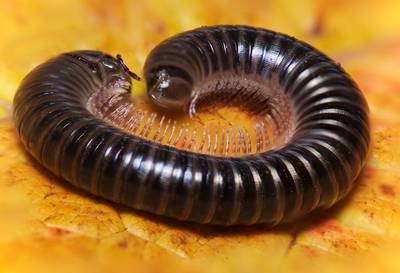 As a child, I was so excited when I’d come across a centipede in the garden. It was usually just a passing copper flash as it...

The Hidden Life Below Ground

As part of World Soil Day, we want to tell the story of what lives below our feet; insects, earthworms and the soil cycle...