Borneo has an estimated 15 000 flowering species of which 6500 are concentrated in the remaining rainforests of Sabah and Sarawak. The island nation may have become renowned for its headhunters and lush tropical species, but it also hides a wealth of knowledge on medicinal plants.
In this instalment of Ancient Gardens, we will be taking a look at some plant species that have been in use for some 2000 years. We will also take a look at traditional recipes from local descendants to spice up your home cooking. The undergrowth hides many secrets if one cares to look.

Borneo is home to several indigenous tribes that have a long history with the forests that surround them. One such tribe is the Penan, a group of hunter-gatherers that make use of local flora as a means of communication (called “Oroo”), healing, food and shelter.
They are masters of blowpipe hunting and forest harvesting. On any given day you will find that dinner consists of a delicious assortment of greens. Sago palm (Eugeissona utilis), bamboo shoots, ferns and smoked boar (curtesy of said blowpipe) make for a rich cuisine.
Here are some delicacies that you can grow at home. Young fronds are picked and stir fried along with spiced fish or chicken.

A single mountain in Borneo is home to more fern species than the entire African continent. It is therefore not surprising that they have made it onto the local kitchen plate. The young fronds are picked and stir-fried to make for a scrumptious meal. 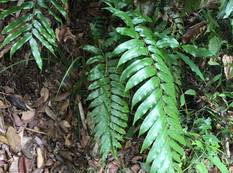 Several indigenous ferns including Stenochlaena palustris and Nephrolepis biserrata contain high levels of antioxidants making them nutritious as well as sustainable. These local ferns are often confused with the bracken fern (Pteridium aquilinum). The latter contains a carcinogen which makes it dangerous to eat without proper preparation. 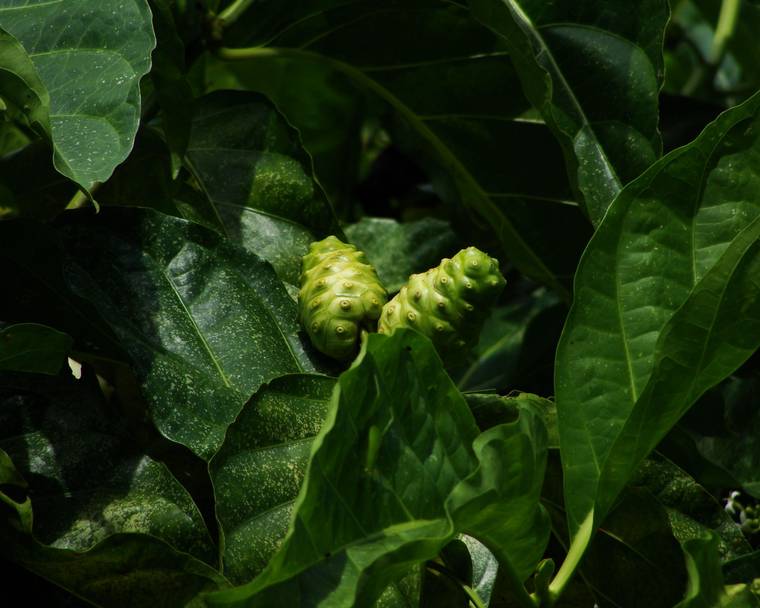 Morinda citrifolia or Noni, as it is sometimes referred to, is an edible fruit that tastes like ripe blue cheese.

Morinda citrifolia, known as Mengkudu, is a tree from the coffee family that produces edible medicinal fruit. Its use as a traditional medicine dates back 2000 years and is a staple in Polynesia as well as Borneo. 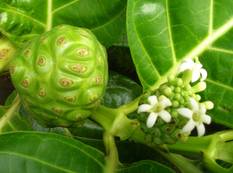 Tribesmen use it for cancer, high blood pressure, head and joint pain to name but a few. The effects are not all placebo as research has confirmed that the plant has antibacterial activity, antiviral (suppresses cytopathic effect of HIV infected cells) and can be used as a supplement to chemotherapy as it boosts the immune response.

Borneo is home to several exotic gingers with bright colourful blooms. The flower buds are harvested as a spice in local cuisine. The rhizome (tuberous root) is often toted as an antinausea remedy but also hides additional benefits. A 2010 study found that the leaf and young rhizome (root) of Zinger officinale contains high antioxidant activity. The latter is prized in both the cosmetic and agricultural industries. 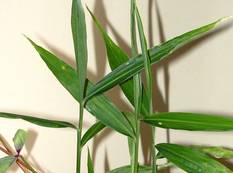 Next time you sit down to a cup of tea, why not add a slice or two of fresh ginger to help keep you healthy. The roots slices can also be pickled and consumed at a later stage.

Every documentary on Borneo mentions the Palm oil plantations, however, it hits home when you drive for 3 hours without seeing anything but palms. If you are wondering what products contain Palm oil you would be surprised to find them in some brands of chocolates, potato chips, coffee and facial creams.
Medium.com compiled a very comprehensive document listing Green (no palm oil) and Red (contains palm oil) products sold in South Africa. Choosing Green might be easier than you think.
If you are keen on finding out more about Borneo then have a look at this film by videographer Matt Jarvis on the last unblemished jewel.

To all readers a big thank you for your support. We love hearing from you, so feel free to leave a comment below and be sure to read the other articles in the series! From the majestic Cape Winelands we move out to the coast via the R44 to explore the famous Kogelberg Biosphere. This area is...