The word lavender comes from the Latin ‘lavare’, meaning ‘to wash’ and is derived from the original use of cleaning and bathing in lavender water.
Lavender has been used for centuries for its antibacterial, antifungal and antiseptic properties. For this reason, it has been used for washing wounds, bathing burns, doing laundry, floor polish and washing away one’s worries. Lavender not only cleans but also calms.
Despite the differences in fragrance between the various types of lavender, they all share the same medicinal properties.
“

Lavender not only cleans but also calms. - Gundula

It is easiest to grow lavender in Mediterranean climates, but they are adaptable enough to various climates as long as there is good drainage and enough sunlight. With there being so many varieties available to choose from it is best to see what size the plant will become to know if it is suited for a potplant on the stoep or rather out in the garden.
When planting, stay away from fertilizers even chicken manure and rather feed with some compost and a little agricultural lime.
If making cuttings, it is best to use the semi-soft wood usually found in autumn. Pull off a non-flowing side shoot with a heel attached. It needs to be a finger length.
Wet the base and dip into rooting powder no2. Or a little honey. Press into a sandy soil about 2 cm apart. Keep warm and moist. It should be rooted in 2 months when the cuttings can be planted out individually in pots.
Pruning is different from harvesting. Give your bushes a light trim while harvesting the flowers or to remove dead flowers. Some perpetually flowering varieties may be lightly trimmed 3 times per year.
Pruning is best to do in autumn, by cutting just above the old wood. Lavenders seldom recover from cuts in the old wood, but respond beautifully from pruning carefully where side shoots can still develop. Every year one would prune slightly higher than the previous pruning. Water and compost after pruning.
Some varieties like the Spanish lavender are rather short-lived, yet many of us remember those big old bushes of French lavender standing resilient for years and years in someone’s garden.

Different types of lavender; each type includes many varieties

‘angustifolia’ means narrow leaf. It has been the basis for the oil industry in Europe but flowers only once. Good to add to cooking. 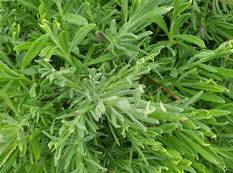 These are those tough grey or green-leaved varieties we tend to be familiar with. Has good medicinal properties, but is too harsh to cook with. 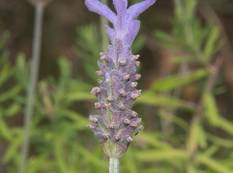 These are rather fun with their bunny-ear blooms. Prune lightly only after flowering to extend their life span up to 4-5 years. The leaves are traditionally used in cooking savoury dishes. 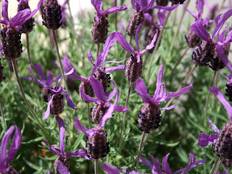 Fabulous for cooking, teas, medicinal uses or distilling. They can cope with some harder pruning.
This group includes the ‘Margaret Roberts’ variety that grows so well in South Africa.
It grows to become the biggest and most vigorous of all lavenders. It has a strong camphor scent, making it ideal for scrubbing onto kitchen surfaces against flies.
This type is used for distilling lavandin oil. 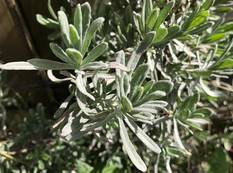 This lavender is purely ornamental and can be temperamental at times, but worth the try.

Lavender in the kitchen

The aroma and taste of the various lavenders differ greatly, so it's best to experiment when using them in tea or baking. Use only fresh flowers stripped from the stalks and use sparingly. When making a cup of tea do not brew for longer than 5 minutes or it will become bitter, 3 minutes may be sufficient to alleviate stress.
“

It is well worth adding a sprinkling of crushed flowers to your favourite shortbread or meringue recipe.

It's Mulberry Season at Babylonstoren

The sun has started rising a little earlier, and the bees and birds are buzzing and twittering their spring songs. This...

At the heart of the Babylonstoren Farm lies the 3.5-hectare fruit, vegetable and herb garden. The garden draws its inspiration...

The Clivias at Babylonstoren

The arrival of spring heralds the beginning of clivia season on the farm when thousands of clivias clothe the banks of the...