If you find yourself with a sick Aloe, the first step is to identify the problem. This is done by cataloguing symptoms (e.g. spots/wilting), linking it to a disease/pest and subsequently connecting it to a cause.
Here is a comprehensive list of symptoms to follow and help you take care of your plant. Leaf curl in aloes can result due to insufficient watering or when it is exposed to high light intensity.

This section is merely an introduction to give you an idea of what will be discussed. Where possible, the individual pest has been linked to plant profiles, or you can continue scrolling to view posts and photos associated with each.
ENVIRONMENTAL PROBLEMS: Cream / white or light brown scarring
Like humans, plants will cover a wound with a ‘scab’ that will appear off-white. This is due to several factors, but mostly physical damage to the plant. When the area is rimmed by a black or brown line it could be a fungal infection as a result of compromised tissue. In some cases where insects have been removed, the remaining tissue of the leaf can appear bronze. 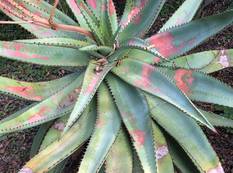 Can you tell me what is wrong with my aloe? Living in Plettenberg Bay

Burst / torn leaves
When a leaf bursts or a tear appears in the middle of a leaf it is the result of the plant taking up too much water. Unlike tropical species they cannot get rid of the excess water and the burst leaves either callus or get infected by fungal spores turning brown/black. Insect predation opens the leaf to fungal infections that can appear in a range of colours.

Fungal infections can look like spots, concentric circles or sections of discoloured leaves that appear black/brown/bronze/orange. In addition, some may cause dents/crusts, wilting of foliage, bumps or pustules on leaves.
Crown rot
If you observe your newer leaves discolouring or turning soft it is most likely a bacterial and/or fungal infection. If the leaves are black then it is most likely a fungal crown rot.
Rotting leaves with healthy roots
Some dual infections (bacteria and fungi) can result in rotting leaves with healthy roots. 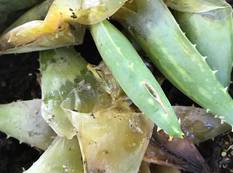 This aloe has rotted from the middle. It has become slimy and smelly. Please could you give me some advice so I can prevent it happening to the rest of my plants in pots!

Standing evil (Stem rot)
Young plants will show a stem / base discolouration (slight brown) causing plants to fall over whilst leaves are green.
Root rot
When aloes appear dehydrated (even with wet soil) or the entire plant comes loose without roots, it is most likely root rot. The roots may appear slimy or dried depending on the age of the infection. Rootrot😨😱 Weeklong rain forecast for Cape Town next week. I recently got a hold of this little one & while repotting out of a waterlogged pot came across a prime example of rootrot. It is hard to spot. Easy to fix though. - Remove the plant - ID any limp and soft roots and remove as much of the dead tissue as possible. - Dip roots in a mix of 2ml sunlight 1L roomtemp water (to limit further infection) - Blot on tissue paper - Repot in dry soil and wait at least a week before watering again. Depending on the plant, you can wait even longer so new roots may sprout. #winter #rain #succulents #rootrot #AloeTrouble #AloePestsandDiseases

Large leaf spots
A black, brown or red spot is often caused by one of several fungal species. This should not be confused with spider mite infestations which result in tiny spots littering the leaf. Fungal colonies infect the tissue in the immediate vicinity of the exposed tissue area causing it to die. Some may refer to dark black sunken spots as sooty mould (this is often due to an infestation of mealybugs or aphids exposing tissue). 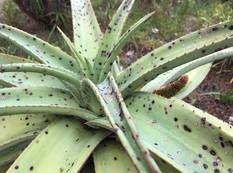 Could anyone give advice on what is wrong with this Aloe and what to do about it please? #aloes #AdvicePlease

Powdery mildew
Powdery mildew is a fungus that has a softer appearance due to the morphology of the fruiting bodies. The leaf may appear like it is covered in soft white fuzz.
Aloe rust
Rust is just a colloquial term for a fungus (Uromyces aloes) that appears in concentric circles of bronze/orange on leaves. 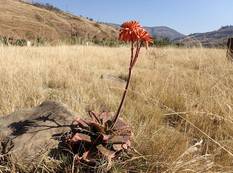 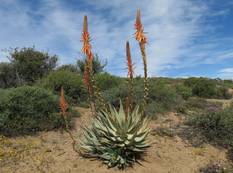 Symptoms can include leaf/stem/trunk or tuber rotting, galls or areas on leaf that turn soft becoming light brown then dying (the latter can also be fungus infections).
Soft rot 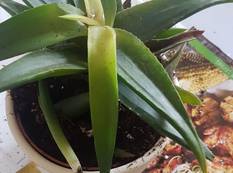 What's wrong with my Aloe? Can someone help? The soil is dry so it's not over watering Insect, or in this case caterpillar, predation on aloes can cause secondary fungal or bacterial infections.

White scale
These look like small white stripes on the leaf that on closer inspection form individual white bumps. They are relatively easy to remove with a hose or wiping the leaf down with a clean cloth. There is also several commercially available pesticides and homemade remedies to remove/kill them. Two applications separated by 3 or more days should alleviate the problem.
For a homemade recipe and treatment see my prior post: Promise its not painted😱 This is a severe case of White scale infection I saw a few weeks ago. Left unattented it kills the aloe. The 2nd photo is a combination of fungus (dark spots) and scale. The dual contamination often happens to a weakened plant. Fungus thrives in mild wet temp like we are currently experiencing. If the plant receives sunlight and dries out then the infection will likely not spread. Removing fungal infected leaves are for the best as some fungicides do not kill spores. If the infestation is not too bad you can spray them with....you guessed it: sunlight in water. Photo 3 is a rescue aloe treated a few days ago. It will take multiple applications though. #winter #aloe #insects #AloeTrouble #LocalPests #AloePestsAndDiseases 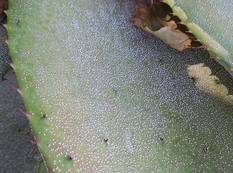 Can anyone help with this disease on an Aloe. How can it be treated?

Red scale
Red scale is rather easy to discriminate as it looks like the plant is covered in tiny fish scales.
Snout beetle
Snout beetle predation results in white or off-white round circles of 5mm in diameter on the leaf surface. Larvae will bore into the plant leaving trails as it eats. 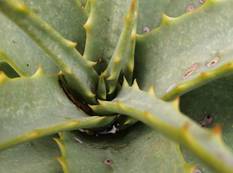 I found these small brown insects on my aloe. Could anybody tell what it is and if they are responsible for the spots on the leaves.

Red spider mite
The leaves take on a speckled appearance as the mites interfere with photosynthesis. Fine spiderwebs may also appear on occasion.
Treatment: Hose down the plant and apply the appropriate insecticide. 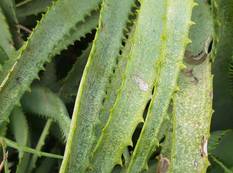 Any ideas about what's wrong with this aloe?

Whitefly
These tiny white flies or larvae attack leaves. The leaves tend to change colour then drop off. The symptoms are similar to spider mites, however whiteflies are easier to spot as they are larger.
Caterpillars
Some caterpillars can wreak havoc on aloes by feasting on the newer leaves. They are easy to spot and remove. If left unattended the plant may suffer severely.
Aphids
Aphids tend to be a problem during the flowering season. If you have ever seen flower stalks develop and then get stripped before flowering it might be due to insect predation on the newly developed flower head.
Abnormal growths: Gall mite / Aloe cancer
When a plant presents with abnormal growth, leaf or flower deformation the cause is most likely microscopic mites.
Examples of Aloe cancer: 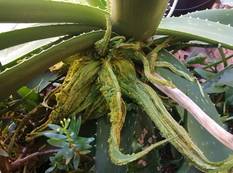 BEWARE: Some proprietors may advise the use of Formalin/Formaldehyde (Formalin is buffered Formaldehyde) as treatment for Aloe cancer. Please take note that Formaldehyde is categorized as highly toxic to inhale, touch or consume and can affect your central nervous system. It is not advised for general use without advanced training.

Aloes do fall prey to diseases in their natural habitat, however, well-placed plants should not need intervention. Always remember to read the material safety data sheet for any chemicals you plan on using and be safe.
Remember, we love to hear from you so let us know your thoughts in the comments below! 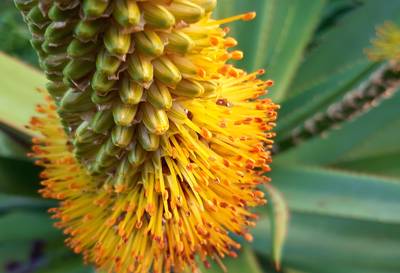 Aloe season is in full swing and as one of the most popular genera in the gardening world, you will struggle to find a...

Succulent Shopping: Where to Buy?

Aloe Festival at The Aloe Farm

Amazing aloe gardens in full bloom, informative talks, and a wide selection of superior aloe hybrids and many other...