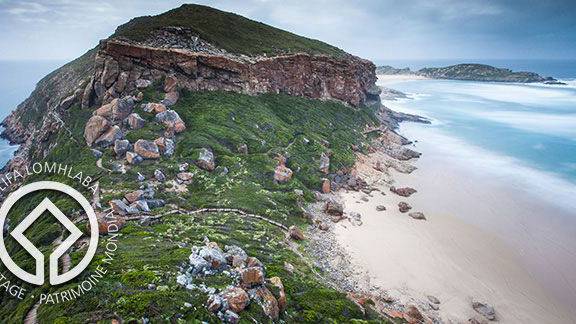 Robberg, situated 8km south of Plettenberg Bay on the Garden Route, is not only a nature reserve, but also a national monument and World Heritage Site. Rocks from this region date back 120 million years to the break-up of Gondwanaland and evidence of middle and later Stone Age inhabitation has been found in a few of the caves along the peninsula. Visitors can find out more at the Nelson Bay Cave interpretive centre.

Some highlight features of a visit here include spotting the rare blue duiker, the Western Cape’s smallest antelope; walking alongside one of the seven climbing-falling dunes on the Cape coastline; and viewing the highest navigational light on the South African coastline, at the Cape Seal Lighthouse (146m above sea level). The reserve also extends 1.8km offshore, providing protection to a range of vulnerable fish species. Visitors can expect inspiring landscapes, exciting dolphin and whale sightings in season, and to be accompanied on their walks or hikes by a variety of bird species and the occasional seal. An overnight hut is available for those who want to spend more time on this beautiful reserve.

Definitely go walk this trail! Unbelievable sights. Not for the faint of heart as it tests you fitness. There are however shorter bits to wonder off to with breathtaking views.

What a beautiful and well-preserved hike! The vistas are absolutely breathtaking. Some of the routes can be dangerous and are not for those with fear for heights.

Very beautiful BUT I would like a little more information. Maybe an information centre and informative literature . Also, the Porta-loos had not been recently serviced. Clean, yes, but not flushing and no water to wash hands and STANK!

6 great white sharks clearly visible, Southern Right and Humpback whales very close. A very special place and one of the most scenic walks on the garden route. The furthest point is very special with 360 views forever!

This place is beautiful, I only hike 2.1km the easy one but my friends hiked 5.4km. My own experience was great and the one of my friends was very very impressive. It's really a recommended place to hike.