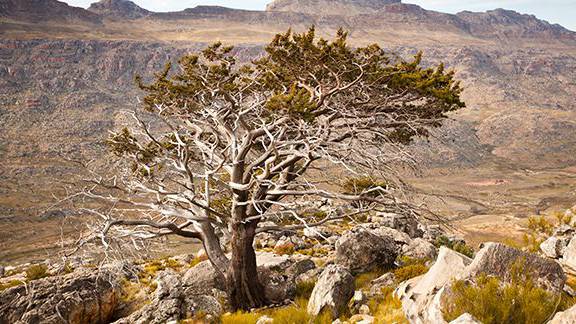 The Cederberg Wilderness is only three hours outside Cape Town, but it feels like a different world. The Cederberg Mountains, burnt orange by iron oxide, dominate the landscape. Jagged sandstone rock formations, like the Maltese Cross and the Wolfberg Arch, and ancient San and Khoi rock art, make this area truly spectacular.

The Cederberg lies 200km north of Cape Town, stretching from the Middelberg Pass in Citrusdal to north of the Pakhuis Pass at Clanwilliam. The wilderness area encompasses about 71 000 hectares of rugged, mountainous terrain, making it a top spot in the Western Cape for hiking and rock-climbing enthusiasts.

The Cederberg, which forms part of the Cape floral region, is a World Heritage Site, is covered in mountain fynbos, including the laurel protea, the red disa, rooibos, and the rare and endemic snow protea. Rare Clanwilliam cedars, the area’s namesake, dot the higher mountain cliffs.

The area is also rich in wildlife. Visitors with a keen eye may spot porcupines, honey badger, the Cape clawless otter and aardvark. The lucky few may even catch a glimpse of the elusive leopard. There are also smaller predators like the African wild cat, lynx, bat-eared fox, aardwolf and Cape fox. Other, more common animals include baboons, dassies, grey rhebok, klipspringers, duiker and grysbok.

Amazing. Must visit whether you are a hiker or climber! We went to the end of winter/beginning of spring. It rained some but not too much and was quite warm some of the days!

Amazing hikes and walks. Recommend 4x4 for comfort although most untarred/gravel roads can be made with regular vehicles. You need to get permits from Cape Nature at various stations and in summer carry lots of water, hat, sunglasses and sunscreen. Start early if possible on day hikes so you avoid midday sun/heat. Buy permit day in advance so you can access hikes etc for early starts. Check difficulty levels if hiking with children. Maps available online or when you buy permits. Maltese Cross is 4-5 hour hike out and back - we powered up in about 1.5hrs so can be done quicker but worth allowing recommended times.

Camped at Algeria. Staff enjoyed the load shedding (do brooms need electricity?), but the bathrooms were clean. The Cederberg are an experience, a must whether by car or on foot! Ansolutely magnificent!

Please note that the NC has many routes that is still dirt roads. The road from Clanwilliam via Doringbos river to Calvinia is one such road. It starts from Clanwilliam as a paved road, but suddenly ends up a dirt road. It is not recommended to take this road with a small or even medium sized city car. The 80 km stretch with many rippled sections took us nearly 3 hours. If you do take the route please watchout for turtles crossing the roads. Stay on main routes like N7 if you are in a small vehicle.

The drive into the Wilderness area is a hectic gravel, stony road for about 15 km as it inclines, but worth it when you get to your destination. Went to Algeria Cederberg..