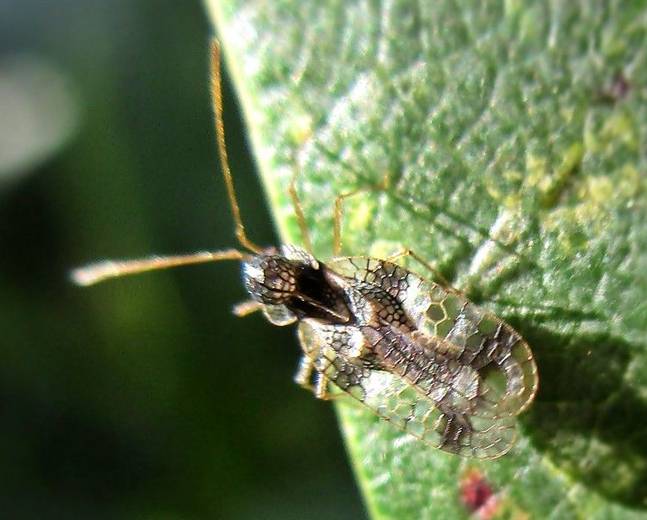 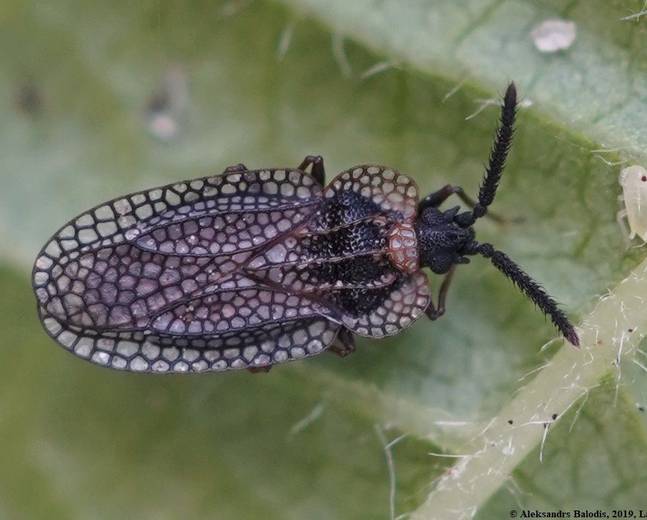 by gailhampshire. CC BY 2.0

1 of 6
Lace Bugs (Family: Tingidae) belong to the True Bug insect order, along with Aphids, Scale and Shield bugs. Like the latter insects, Lace Bugs feed by sucking the sap from plants using an incredibly thin feeding tube, similar to a tiny needle! Lace bugs will often leave behind 'clues' that give us an indication of their presence. They attack the leaves from underneath, and in doing leave white speckles that cover the upper leaf surface. When plant cells are sucked of sap, they dry out, giving leaves a bronzed or silvery appearance. Some species can cause plants to form galls; which are abnormal structures produced by a plant in response to the chemicals found in insect saliva.
Free download for your phone or tablet

Their feeding can cause plants foliage to look 'silvery'. Some can trigger galling in plants.

Get their names from the intricate network of lace-like wing veins.

Adults: Lace Bugs are easily recognised by the delicate and lace-like sculpturing of the wings and thorax. They are usually white, cream, brown, or black- but this may vary. They grow no larger than 1 cm; with most species measuring beneath 0.5cm. Eggs: Females inject their eggs into the plant tissue, sealing up the entrance tear using their excrement! This can look like tiny black dots under the leaf.

Sap-sucking behaviour kills plant cells. Numerous white speckles on the surface of the leaves. From underneath, leaves may appear silvery or bronzed. Mottled or discoloured leaves. You might see black dots or protrusions under the leaf. In most cases, plants recover from damage. Premature leaf fall. Stunted growth.

Sometimes the presence of these insects should be tolerated. Damage is mostly aesthetic, plant death being rare. Regular monitoring and good plant care will ensure your garden is healthy enough to deal with minor pests. Keeping gardens tidy with the correct maintenance should help to keep any damage at a minimum. If mulching, don't use the leaves of the same plant because this could harbour lace bugs and eggs. Attract beneficial insects into your green spaces by providing insect habitats, allowing pests to persist, and by planting a selection of indigenous plants. Provide shade for shrub species and insects which don't like warm microclimates. If the plant has passed the point of no return, it would be most feasible to watch plants closely before the weather begins to warm again. It's the best time to act when the smaller nymphs emerge. Prune off any branches and leaves that wilted and damaged. You can try a jet of water on infested plants that are of reasonable size. The cheapest form of action is close monitoring, picking off insects as and when they're found.

Chemical treatments should only be considered when a plant is severely infested and close to death; this, however, is unlikely. If possible, it's best to use products that are the most selective towards the pest. If not, try to use something which is environmentally benign and non-persistent, such as contact insecticides. Neem, insecticidal soaps and pyrethrin products have been suggested. Consult with your local gardening centre to be sure you're using the right product for your plant problem. Plants in flower should never be sprayed. You should only ever opt for this form of treatment when insects are present and visible on the plant. Not sure what to do? Ask our wonderful community!

A wide variety of plants.