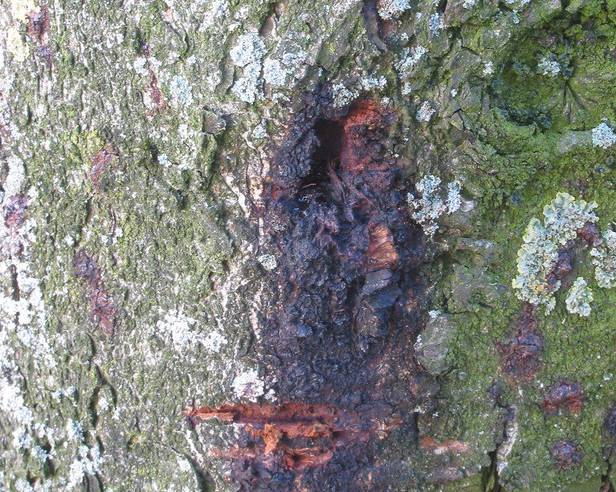 Cankers are characterized by the growth of small areas of dead tissue over several years. They can be caused by a wide range of fungi or bacteria and vary in degrees of severity. Horse Chestnut Bleeding Canker can be caused by two pathogens, the fungi, Phytophthora; and the bacterium, Pseudomonas syringae pv. aesculi. Both target Horse Chestnut and Red Horse Chestnut. Interestingly, recent data has found a rise in cases caused by Pseudomonas. As the name suggests, the main symptom of Bleeding Canker is lesions which exude a red-brown liquid. This liquid stain trees rusty red-brown in the summer. Horse Chestnut trees respond to the bacteria by bleeding. The liquid is what damages the inner bark, cambium and outer layers of wood, disrupting the movement of water and nutrients. Ultimately, Bleeding Canker disease leads to tree death. But sometimes, trees show periods of improvement, with some reaching full recovery. More research is needed to understand the life cycle of the disease better.
Free download for your phone or tablet

A red-brownish oozing liquid which seeps from cracked bark. This ultimately dries out, staining bark black and red-brown. When cutting away at the bark, a stained area of purple/ brown may be evident. If the discoloured area diffuses into the bark, the disease is spreading. A defined, patch of discolouration means the infection is stable. Bark surrounding the canker begins to fall off, exposing the wood beneath.

It's thought symptoms are worst during colder wet weather.

Open, bleeding, lesions; or cankers.
Cankers ooze a dark-brown red liquid, which dribbles down the tree.
Bleeding can occur at any point on the tree.
In summer, the exude dries creating a red-brown stain.
The bleeding area can crack open.
Fungal fruiting bodies appear where bark has cracked.
Leaves begin to turn yellow.
Yellow leaves fall early.
Purple-blue stains when bark is pulled up.

Removing diseased material from the plant can reduce the rate of spread or halt the disease. Diseased material should be burnt if possible. If this can't be done in the garden, materials should be removed by the local council. A professional can be hired and will remove the affected plant parts.

Research on the bacterium is still underway. It may require a point of entry, which could include other wounds, pores, cracked bark etc. It's likely the bacterium can be spread via wind and water, and symptoms become most notable in wet, cold weather.

Growing Horse Chestnut from seed would be another option. It's unlikely both pathogens are seed-borne. Maintain good tool hygiene. Be sure to clean tools, boots and vehicles if you treat a plant which shows symptoms. If you suspect a plant is infected, remove and destroy plants promptly. Ensure all plant matter is cleared and removed. Always opt to grow resistant varieties, where possible. 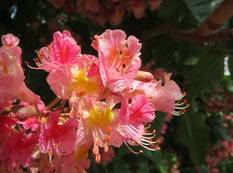