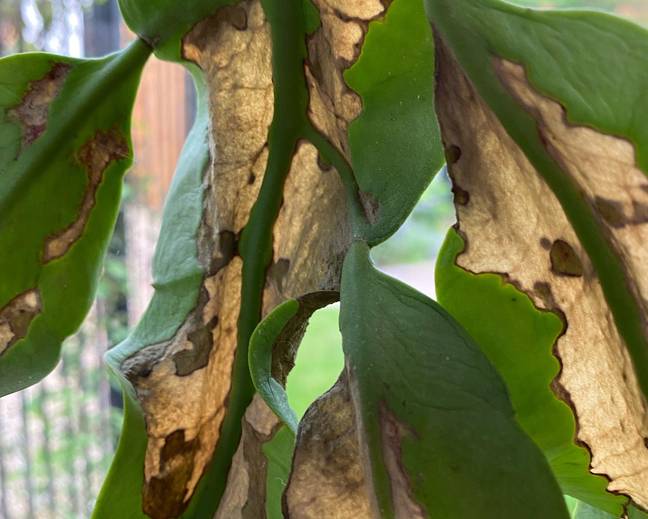 Extreme temperature does not complement plants well. In particular, intense sun and high temperatures can cause a handful of disorders in plants. Sunscald is when the sun shines directly on plants for a prolonged period, causing tissue temperatures to rise, or too much water is lost from the plant before its replaced. Sunscald is a disorder which affects thin-barked trees such as beech, cherries, maples or poplars. Fruits can also be affected by similar causes; tomatoes, gooseberries, apples and pears are some of the first affected fruits. Greenback can arise when the fruit of trees are exposed to strong sunlight, resulting in brown burnt parches on the crop. In addition, high temperatures can cause heat canker in woody plants, and a similar disorder called 'strangles' in root veg and other leafy plants.

Dead patches of bark may be evident on trees such as beech, cherries, maples or populars.
Sometimes the whole South facing side of tree bark can be killed.
Fruits can also be scalded, producing patches of red-brown on fruits.
Fruits can develop green-yellow papery patches.
Bulbs left in the sun can be damaged, and may prevent flowering when planted.
The foliage of indoor and outdoor plants can become scorched if left in direct sunlight for too long.
Hot soil can damage the stem bases of plants, resulting in canker.

Please note: with every 18°F increment, the amount of water lost by plants is doubled. For this reason, during hotter periods of the year, the temperature should be monitored closely and irrigation adjusted accordingly. Try not to water during the hottest periods of the day. It's been proposed that water droplets can act as a magnifying glass, focusing light from the sun on a small surface area. It can sometimes be possible to purchase plants resistant to some of the disorders mentioned.

Help us build a place where community meets knowledge. Try it out and let us know what you think.