Allium porrum 'American Flag' is a good variety of leek for home gardens as it is fairly easy to grow and produces delicate tasting leeks. American flag leeks produce heavy, tall, wide stalks that sweeten in autumn and winter. Commonly known as Leeks, they are biennials which are grown for their long fleshy stems and strong taste ideal for adding to soups, stews and casseroles or eaten raw as part of a salad. Leek 'American Flag' can be sown into seed trays, under glass in late winter and transplant after the last frosts for the best results. As the stems start to grow and mature they can be blanched by mounding up dry soil around them. Your tasty stalks should be ready to be harvested in early autumn, throughout winter and into early spring. 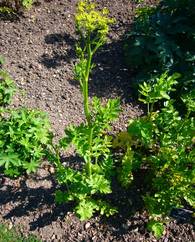 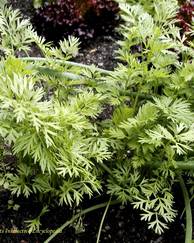 How to harvest Leek 'American Flag'

Harvest blanched bulbs when they are about 3-4 cm in diameter, usually about 140 days after planting. Harvest with care as not to damage adjacent bulbs. Immature plants can be harvested throughout the growing season.

How to propagate Leek 'American Flag'

Sow into seed trays in early Spring and transplant into beds once seedlings are roughly as thick as a pencil. Plant out by making a hole bigger than the seedling, place it into the hole and watering it in - do not fill with soil or firm it in. This way, the roots will spread out as the plant grows and protect it more from toppling in the wind as it gets taller. Direct sowing : after the last frost, sow seeds thinly, 2.5cm (1") apart into drills approx. 0.5cm (1/4") deep, with each drill spaced 15cm (6") apart. Cover the seeds with sifted soil, firm the soil down and water in. Germination should occur within 14 to 21 days and is usually very good. Seedlings will need to be thinned out to leave plants 10cm (4") apart.

Plant in beds that have previously been used to grow lettuce, cabbages or peas.

Other uses of Leek 'American Flag'

Culinary. One of the oldest known vegetables with archaeological evidence of it being grown in Mesopotamia as far back as 2000 BCE. Leeks are one of the national symbols of Wales. The story goes that in 640 A.D, King Cadwallader and his Welsh fighters wore the plant on their hats to distinguish themselves from the enemy Saxons and won the battle. In Hebrew, the word for 'leek' is 'karti' which is a pun on another Hebrew word 'yikartu', which means 'to be cut off'. So a Jewish tradition is to eat leeks at Rosh Hashanah to symbolize a wish for enemies to be 'cut off'.

The stems, leaves and bulbs are edible