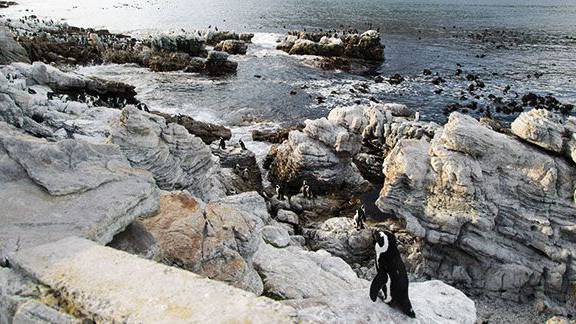 Located in the quaint coastal town of Betty’s Bay in the Overberg, the Stony Point Nature Reserve is home to a unique colony of African Penguins. Stony Point offers the public the chance to see these wonderful flightless birds up close, via the boardwalk through the colony, which allows the public to observe the penguins go about their daily activities in their natural habitat, without disturbing or disrupting them.

Also present in the colony are three species of cormorant; the Crowned cormorant, Cape cormorant and Bank cormorant, all of which breed on the outer rocks. There are also Hartlaub’s Gulls and Kelp Gulls which forage in the colony, while the Rock Hyrax, more commonly known as the Dassie, can be seen on the surrounding rocks.

The colony lies on the site of the old Waaygat Whaling Station, which was used to harvest and process whale meat in the early to mid-1900s. Remnants of the machinery and infrastructure for this long-defunct industry can still be found at the site.

There is also a community restaurant adjacent to Stony Point, which sells refreshments and food during the day.

Excellent. There are endangered penguins and it's worth it to drive out here to see them in their (almost) natural habitat. The parking is ample though it does get crowded on free access days, but everyone is super friendly and polite. People are willing to help you take the pic that you were chasing. The entire walk is pretty short, but the path is well-marked and accessible for wheelchair users. There are also plenty of signage along the way to keep you informed as well as benches to sit and take it in. The smell isn't so great. Normal cost for entry is only R30 per person, and no Wild cards apply.

For Betty's Bay and Simon's Town to visit the penguins, my biggest difference is that Stony point is more vivid and natural than Boulder beach! There is no noise from vendors and crowds; and there are no too many artificial fences that make us feel closer to the penguins. Secondly, Stony point fares are cheaper; half-jokingly: one belongs to local residents, another one belongs to foreign tourists. Plus: The penguins at Stony point have neighbors: Rock Rabbits! You can find them at the entrance; they are timid, please don't startle them. Finally, a special recommendation: For the penguin viewing itinerary at Betty's Bay, please stop by the Harold Porter Botanical Garden; if possible, go to the Kleinmond Harbour for seafood too!... ... . 😋

I really think that this place should stay open later during December holidays! 16h00 is way too early to close. Other than that, it was a nice experience. We saw some local lizards, dassies and ofcourse... penguins...doing the nasty 😊😆😄.

Lovely. Compared to the Cape Town penguins I liked this a bit better but alas if you like animals I’d just do both. I feel like this one had more but I think the stats say otherwise. It was very cheap and calm and relaxed and super nice backdrop so maybe that gives this one an edge for me

Plenty of penguins sunbathing for you to admire. Some are even brave enough to come really close to you when they try to get back to their nests on land giving you a proper up close and personal experience with them.