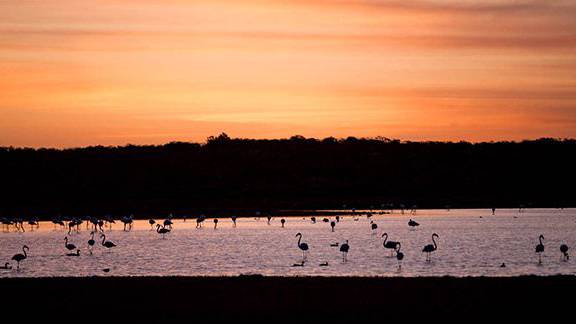 Rocherpan is a coastal nature reserve teeming with birds and colourful wildflowers. The reserve, which lies 25km north of Velddrif on the Cape West Coast, consists largely of a seasonal vlei that is usually dry between March and June. Rocherpan was established as a nature reserve (930 hectares in size) in 1966, and the adjacent section of the Atlantic Ocean was declared a marine reserve in 1988 (150 hectares in size).

Rocherpan had a fortuitous start when farmer Pierre Rocher arrived in this area in 1839 looking for improved summer grazing for his livestock. Rocher and his workers closed off the mouth of Papkuils River, forcing it to flow behind the dunes that separate the sandveld from the sea. This inadvertently created a perfect habitat for waterbirds, and the local species have thrived ever since. Along the coast, you’ll see the rare and endangered black oystercatcher, the kelp gull and the Cape shoveller.

Went away for the weekend in the Coot accomodation and it was AWESOME. The walk to the beach from the unit and from the picnic area is quite a stretch and there were dead seals laying on the beach. The hiking trails are quite scary and narrow and bushy.The pool was awesome but the flies were up in your face while swimming. The signal is not great and the WIFI is quite poor only YouTube works.

Very tranquil and scenic. But make sure to go later winter to spring if you want to see the water birds. We went in March and the pan was completely dry. Saw 2 ostriches.

Friendly staff, lovely eco cabin (Sandpiper). Enjoyed the beach walk, got a bit lost on the guarrie trail (asked reception staff to improve signage along the trail). Very peaceful, amazing sunrise and sunset. Saw a wide variety of birds. They’re fully off the grid which was a nice surprise ! Enjoyed the putt putt, swimming pool available as well.

Beautiful breakaway on the Cape WestCoast. Chalets are adequately equipped and clean. Impressively “off the grid” !

We loved Rocherpan Nature Reserve. It was well run and maintained. The booking process is a bit manual but works, and the team communicates very well. Our cabin had an amazing view over the pan. Even though there wasn't water in the pan when were there, it was beautiful and there were lots of birds. The beach area was very quiet and it feel a bit like a private beach.