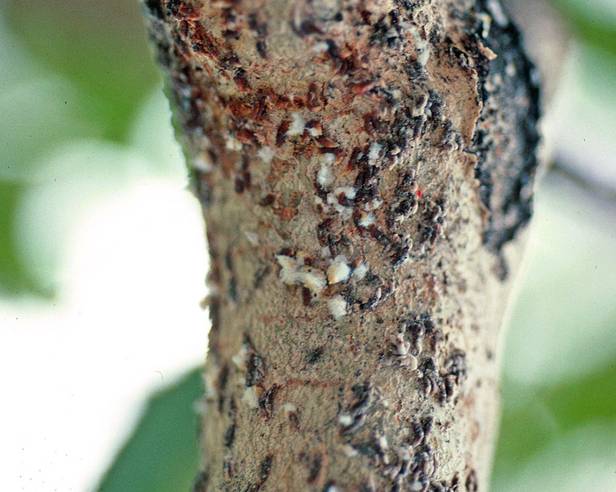 Apple Mussel Scale is an armoured scale that targets woody-stemmed plants. These scale insects are black and elongate, and they look like mussels, the mollusc, which is where they get their common name. Because Mussel Scale is an armoured scale insect, it won't produce honeydew (the sticky clear liquid associated with most true bugs!). They can, however, stunt the growth of plants when infestations are heavy. They'll also attach themselves onto the fruits and apple and make them inedible.
Free download for your phone or tablet

Heavy infestations can cause stunting, foliage yellowing and bark cracking.

It's the females that are commonly sighted by gardners. They're grey-black and elongate. They look like little mussel shellfish, reaching only 3mm. Nymphs are tiny so rarely seen. They are pale yellow and can be seen crawling over bark.

Heavy infestations can alter vigour and stems may die back. You may notice black, oblong scales covering the stems of infested plants. Copious amounts of honeydew, or black sooty moulds, may be associated with infested plants. These scale may spoil fruits.

These scale insects have a few natural enemies, including parasitoid wasps and some species of a predatory mite. Vigorous plant growth seems to deter these scale, so it's suggested to provide good plant care when infestations become evident. Lighter infestations can be rubbed off. Heavier infestations may require some pruning. There are some insecticidal soaps and plant oil sprays that can be applied to the bark of plants. Any old scale insects should be scraped off before any treatments are applied. Dead insects stay attached to the bark, acting as an extra layer of protection for those scale insects that are reinfesting the plant.

As they have a hard waxy cover, they are difficult to kill with pesticides. When tackling scale, it's best to apply sprays during the earlier nymphal stages, when these insects are at their smallest and most vulnerable. These stages are most prevalent during June. If you do decide to go down the chemical route, make sure to consult with your local garden centre, research well and read bottles carefully. 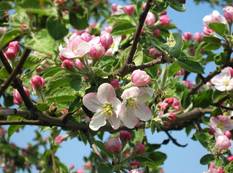