The first bat-friendly street lights in the UK have been switched on in Worcestershire.
Many species of bats, including some of the rarest species in the UK, are light shy and won't cross roads lit by white lights. The lights also attract insects that bats feed on, reducing the food available.
Some bats have bee known to hunt near to lights, but this puts them at risk of predation - peregrines have been known to hunt bats in our well-lit cities.
The UK is home to 18 species of bats. All of the most endangered species tend to avoid light, although even more common species (pipistrelle species, noctule, Leisler's bat) can still be affected. 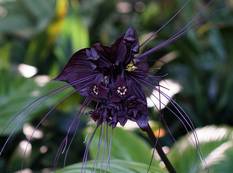 Weirdest Plants in the World: the Bat Flower

The LEDs produce red light in a unique 'recipe' of wavelengths which has been proven to not affect bats of their feeding habits.
Download Candide to your phone to get your daily gardening news

The first bat-friendly lights create a bat-friendly crossing approximately 60m in width near to Warndon Wood nature reserve, Worcestershire. The council, who set up the project with Jacobs, hope that this will help to balance the local ecosystem.
The lights are on the A4440, near Warndon Wood Nature Reserve
Councillor Ken Pollock, Worcestershire County Council’s Cabinet Member with Responsibility for Economy and Infrastructure said: ‘These ground-breaking lights are a great example where we have been able to adapt the usual standards to better suit the local environment.
'The adapted lighting being used may look a little different at first, but we’d like to assure those using the area at night that the colour of the lights has been through stringent testing and adheres to all safety checks.’
Visibility for drivers and pedestrians is not affected by the red light and the scheme is fully compliant with the required standards. The light ‘recipe’ has been carefully crafted to meet the need of road users and residents, alongside those of the local wildlife.

More people than ever became members of The National Trust between 2018 and 2019, according to the charity's annual report.

A GP practice in Manchester is introducing a scheme to tackle loneliness, anxiety and depression by prescribing potted plants.

Highdown Gardens, located in Worthing, has won more than £800,000 to develop their garden and preserve rare plant species.