The Best Hedge Plants to Grow in Gardens 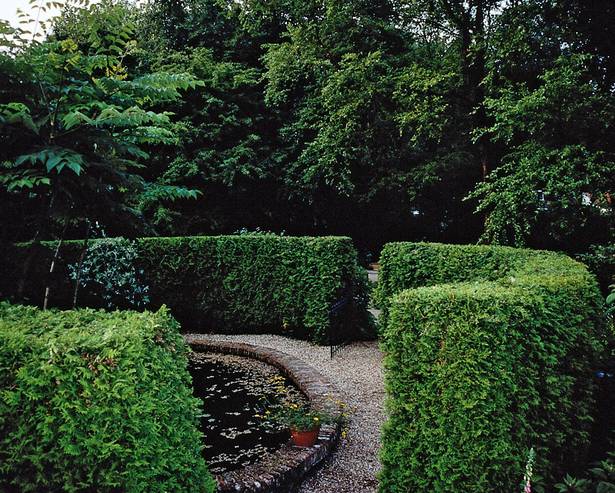 In this article, I'll briefly list the pros and cons of many of the most widely grown hedge plants. I'll also give the popular ones my star rating; but bear in mind, some may score low for general planting but be exceptional in very windy or coastal locations. I hope that this will help you choose the right plant for your hedge!

We plant hedges to provide privacy, mark our boundaries, and provide shelter and food for wildlife.
Most hedge plants are 2 or 3 years old when you buy them, but it's possible to buy instant hedges from specialist companies, too. If a larger than normal evergreen plant is sought, plants should be bought with a root ball of earth around each pot-grown.
Aim to trim your hedge so that the top is always narrower than the base when viewed as a cross-section. This allows light to reach the bottom of the hedge and reduces the likelihood of the lower part of the hedge becoming sparsely covered with leaf.

Evergreen plants provide year-round privacy, but some are slower to grow and are often more expensive than those hedge plants that lose their leaves in winter.

Cherry Laurel is one of the most popular choices for a dense, evergreen hedge, and does well in a range of soil types and situations. Whilst it will not tolerate waterlogged soil for long periods, it will grow on wet soils. It grows at medium speed - about 60-75 cms per annum, so an annual prune will suffice! Cut Cherry Laurel using hand shears to avoid tearing the large leaves, as this can make hedges look messy!
4 STAR

With smaller leaves than cherry laurel, I think this ultimately makes a better hedge. However, it's a slow-grower (30-40 cms pa), less widely available and costs more. Leaf damage from cutting doesn't really apply to this laurel. Portugal laurel tolerates a wide range of soils, and like cherry laurel, it's also good when grown on chalk soils.
5 STAR Again, small leaves are a feature of Griselinia hedges. Griselinia littoralis has apple green evergreen leaves and is very wind and salt-laden wind tolerant, so is a good choice for coastal gardens. Griselinia may be damaged or even killed by hard frost inland, in cold spots and gardens at higher elevations. It's widely available and an increasingly popular choice now. Griselinia has a medium growth rate (40-60 cms pa). There are variegated forms, but I'm not a fan. Once a reliable 'must-have' choice, box is now plagued by either box blight or box tree moth, or both! I'd advise against choosing this for you garden now and look for alternatives. The Royal Horticultural Society has an interesting box alternatives trial underway now at their Wisley Garden, and it's well worth a visit. Japanese holly Ilex crenata has been the front runner as an alternative choice but is very slow-growing. 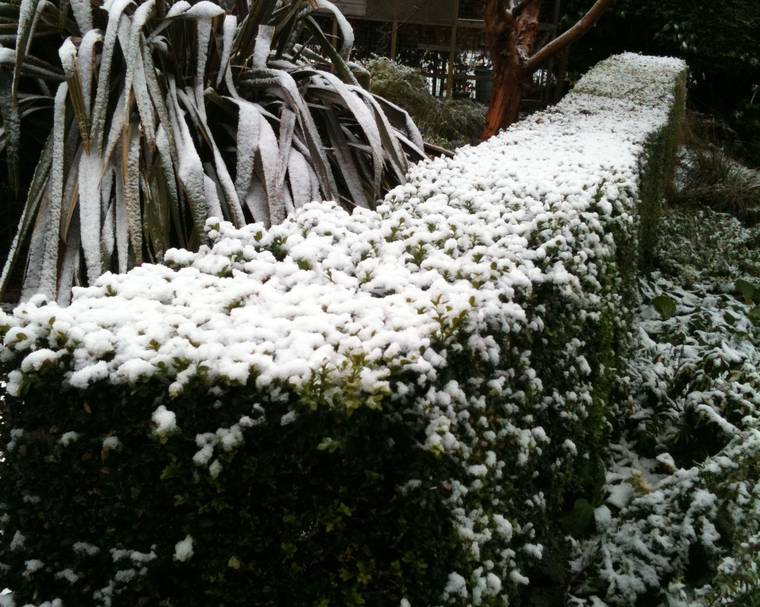 A box hedge covered in snow

There are masses of other evergreen hedge plant choices. Holm Oak, Bay Laurel, Elaeagnus , Laurustinus, (Viburnum tinus), Pittosporum, Shrubby honeysuckle (Lonicera nitida), holly (Ilex aquifolium) and Escallonia are the front runners, but there are many others. Laurustinus has pretty winter flowers but to see these at their best its best to allow your hedge to grow informally. Elaeagnus and Escallonia excel in coastal gardens, but inland Escallonia has leaf disease issues. Elaeagnus has hidden late autumn flowers that are very strongly scented. The shrubby honeysuckle has dropped out of fashion but was once a popular choice in the past. A holm oak hedge at The Newt in Somerset

Yew is still the classic garden choice! It has really dark green foliage that 'sets off' plants in front really well. Having a reputation for being slow-growing and certainly a more expensive choice, Yew is still makes a superb hedge. Regular watering and minimizing competition from weeds and other plants in the early years will go a long way to getting good growth. Normal growth in early years can be 30 cms pa slowing to 15-20 cms later in life. An annual trim is plenty for this plant!
5 STAR Alan Down trimming a yew hedge

Once one of the most popular hedges to plant, Leylandii Cypress is now very out of fashion. This is largely due to the hybrid vigour it has, and that it must be frequently clipped; otherwise, it becomes a very unsociable garden hedge. Yellow leaf versions are available. I would not personally recommend Leylandii Cypress for a garden hedge.
1 STAR A leylandii conifer hedge with hawthorn in the background

If you want a conifer, then this is an excellent choice! If you choose the selections 'Atrovirens' or 'Fastigiata' growth is naturally upright. Slower than Leylandii it ultimately needs far less frequent cutting. Scented foliage is a real bonus. If things get out of hand, this conifer will regenerate after cutting back hard - which most other conifers will not! Can be grown on a wide range of soils but not happy on an exposed coast. See title pic for this one.
4 STAR

Green or copper beech is a top choice! Regular clipping (twice per year) maintains juvenility, and that means that the leaves remain attached to the hedge in winter. The winter dead leaves in beech can be a glorious golden brown colour. The growth rate is medium at 40-60 cms pa. Beech withstands exposed windy locations and shallow soils. It will not tolerate wet soil and bad drainage (see hornbeam). Widely available and keenly priced.
5 STAR 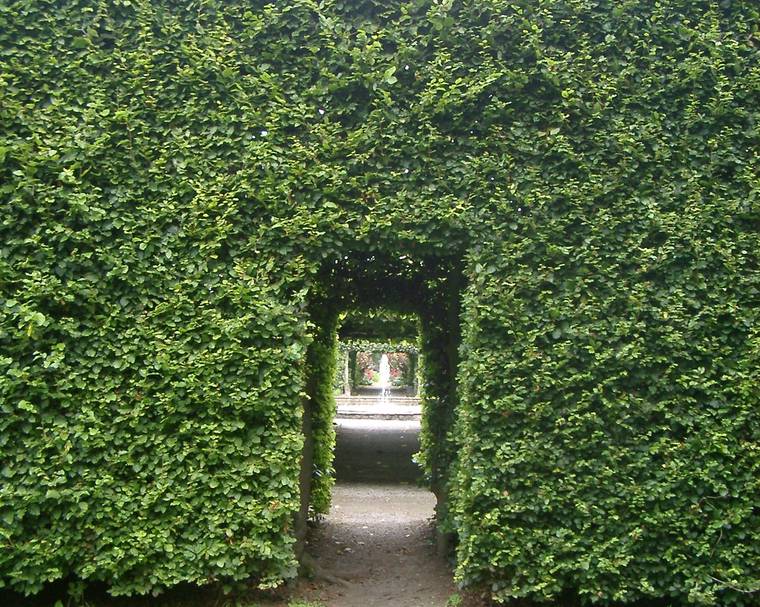 Where soils are heavy or have imperfect drainage, hornbeam is a great choice. As with beech, regular cutting maintains juvenility and retains leaves in winter. Not as frequently offered as beech so you may need to pre-order. Growth rate and pricing similar to beech.
4 STAR For gardens in a rural location, native plants work well. But they can also be used in urban areas too, especially if you want to encourage wildlife. Hawthorn (Crataegus monogyna and C. laevigata) is the most popular choice to which is often added thorny blackthorn (Prunus spinosa), dog rose (Rosa canina), hazel (Corylus avellana), guelder rose (Viburnum opulus), wayfaring tree (Viburnum lantana) and common dogwood (Cornus sanguinea). Growth rates vary with species. This mixture will grow well on most soils and in most situations, but locally dominant species in the countryside should be added. These plant choices tend to be available from specialist suppliers or direct from nurseries. An annual cut is often sufficient, but more frequent cutting produces a dense hedge. 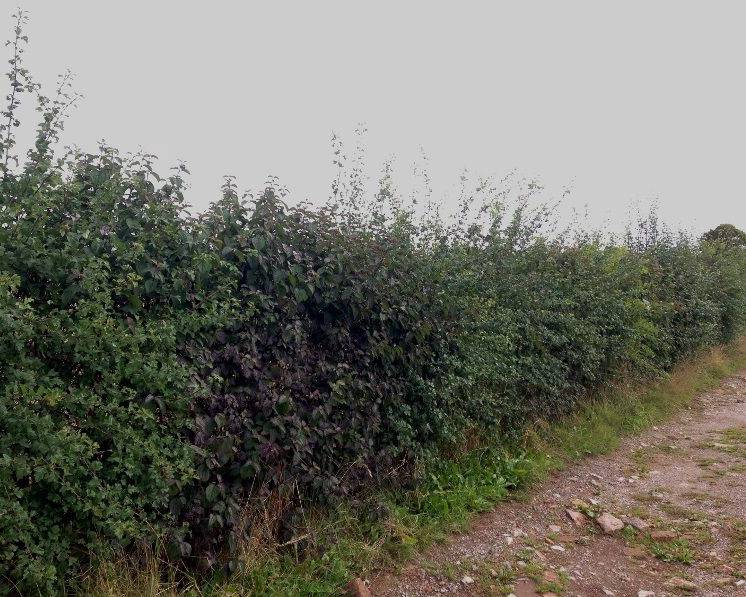 If you want a flowering and scented informal hedge, then perhaps roses are for you. Whilst dense in summer rose hedges can be sparse in winter. A bonus might be that some varieties produce showing hips to provide autumn and winter colour. Many varieties are available, but it would be wise to look for varieties that do not produce suckers or are prone to disease and need regular spraying. I recommend buying directly from rose growers.
3 STAR This one could be evergreen in mild parts but invariably loses its leaves when winter temperatures fall. There are attractive variegated versions, and both are pretty much bomb proof. It's vigorous at around 75 cms growth per annum and requires several cuts per year. It produces a quick result and can be relatively inexpensive unless bought as pot grown plants. Grows well on any reasonable soil. Fairly widely available.
2 STAR Has this article left you feeling inspired? Browse all outdoor plants on Candide

Have you noticed that local footpaths have become a bit of an obstacle course over the last few weeks? The growing season is... There’s nothing nicer than stepping out into your own back garden – a private green space separated from the rest of the busy...