The second on our list of the five invasive, non-native plants, listed on the UK government website (for the others see “Outlaw #1: Japanese knotweed”) is giant hogweed (Heracleum mantegazzianum). An engulfing giant and anathema of the pea-shooting child, what makes hogweed such a problem and what can we do to help prevent its spread? In terms of conquering new territory, giant hogweed worked fast. The first records show it reaching Kew in 1817, yet just over a decade later the first wild populations were documented in Cambridgeshire in 1928. What had been introduced as a garden curiosity from the Caucasus, due to its mammoth stature and dinner-plate-sized flowerheads, would soon stake its claim on new territory, spreading rapidly through not only Britain, but continental Europe and, eventually, North America.
Download the free Candide App to get help and answers form a warm community of gardeners

Whereas knotweed used the rail network to spread, giant hogweed took advantage of our waterways.

Like other non-native invaders Heracleum crowds out our native species and it has some impressive stats, in fact, seeing a fully-grown specimen in full flower is quite a spectacle. The plants produce a large rosette of leaves in their first year and this alone can be up to 2m across. The flower ‘tower’ which comes the following year can grow up to a colossal 5m in height, dwarfing even our own native hogweeds, and the flower head itself often measures up to half a metre across. As with many other members of the carrot family, this is white and comprised of hundreds of small flowers which are a big hit with bees.
The fact bees love the flowers so much is part of the reason hogweed wasn’t as severely dealt with earlier on. From all these flowers, of course, come seeds – up to 50,000 per plant – after which, the plant dies.

The plant also has a serious effect on our waterways, due to its habit of monopolising an area.

Once plants have flowered and died, there is nothing left to stabilise the riverbank and this causes significant damage as well as expense to landowners. Giant hogweed is probably most (in)famous for its phytotoxic sap.

If the sap gets on your skin, remain out of sunlight until you can wash it off as it’s the reaction to UV that causes the blistering. Burns will heal in a couple of weeks, but the skin may scar and can remain sensitive to sunlight for months.
It goes without saying that if you want to remove giant hogweed from your land then take measures to protect yourself, wearing PPE (personal protective equipment) such as gloves, resistant clothing and goggles. As hogweed often grows by water, then chemical control is out of the questions and although removal is by no means as labour intensive as Japanese knotweed, then it still takes tenacity.
Cutting back and even mowing the rosette will take several attempts, but should finish off the plants and cutting back under the soil, too, if you can’t dig the whole plant out, will work over time.
Read all articles for free in the Candide App

They are tenacious, and so should you be.

In a sense, it is sad that Heracleum mantegazzium is a pest species as it really is a spectacular plant, but as with the other species on the list, giant hogweed acts as a reminder for the impact humans have on their environment through introducing new species without prior knowledge. Over the next few weeks, I’ll take a look at each of them individually and understand how to identify them and prevent their... 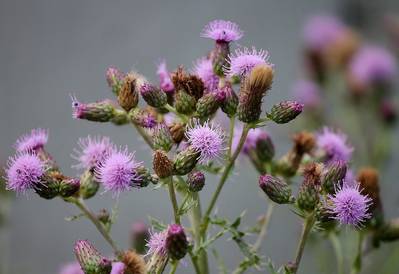 Knotweed is currently the most invasive plant we have in the UK and as such, is treated extremely seriously. If you think you...