How to Make Leaf Mould

43
For me, it's officially autumn when the leaves start to arrive on the grass. After the last couple of weeks of downpours, they're beginning to cover the lawn, and I'm rubbing my hands in anticipation of free organic matter in the form of leaf mould. And all I have to do is collect it up, stick it in a corner and wait patiently.

Leaf mould is mentioned by gardeners and advice columns regularly, but they rarely explain what makes it so good. It is naturally low in nutrients, as it's composed of leaves from trees and shrubs which have already removed much of the nutrients back into their roots.
Well rotted for two or more years, this material is the perfect compost to sow seeds in, as the young tender roots will not be 'burnt' by the high levels of nutrients found in some enhanced composts.
Equal amounts of sharp sand, good quality topsoil or garden compost will enable the cuttings to root quickly.
Its ability to hold moisture, while allowing any excess to drain away, also helps to create ideal growing conditions for young plants.

I riddle (sieve) as needed, adding the leftover bulky material back into this year's collected leaves to carry on breaking down.

Leaf mould left to rot for two or more years produces the most fantastic substance. But equally, young, one-year-old material also has a variety of uses.
Spread this beautiful stuff around plants in the border, or on top of containers. It will smother weed seedlings and stop more from growing. And as well as helping to prevent evaporation in dry weather, mulch will also prevent soil runoff during rainy spells.

Forking in a bucketful of soil improver into every meter square once a year will help to improve any kind of soil, also making the colour of the earth darker. The combined organic matter benefits naturally occurring soil microorganisms, which in turn improves the health of our plants.
Once you've scarified, leaf mould can be raked evenly over the lawn's surface to help level out bumps and hollows before you overseed.

If you've harvested crops and are not planning to sow anything else in the beds for a while, then young leaf mould can be spread evenly over the surface. Worms will slowly pull it into the soil, which will prevent the winter rains from forming a surface crust.

How to make Leaf mould

Making leaf mould is a straightforward process entirely dependant on the amount of space you have for storage. As a rule of thumb, the quantity of leaf mould produced is about a quarter of the volume of leaves you've collected.
With more detailed advice, Aldetha put together a useful guide on making leaf mould, which also includes the best type of leaves to use and avoid. 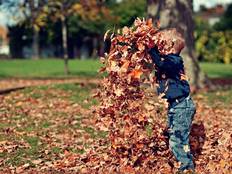 I collect what I can and use an old bathtub covered with chicken wire on the allotment to store it for the first year. Why a bathtub? I inherited six tubs when I took over the plot, so have tried to make the most of them!

I find emptying all of the contents from the baths into bags after the first year not only aerates the mix helping to speed up the process, but frees up space for this year leaves. Speaking of which I must get on with emptying them this weekend, I've several bags waiting already.