Elizabeth Blackwell (bap. 1707, d. 1758)
Around the year 1700, a daughter, Elizabeth, was born to a successful stocking merchant in Aberdeen.
When she was 28, she eloped to marry her second cousin Alexander Blackwell (which must have caused great consternation). Although well-educated, he was a distinctly dodgy character.
While Alex was a practising physician, the pair moved to London where he set up a printing business using her substantial dowry, despite not serving the required four-year apprenticeship. Within a short time, his print shop was closed down, and he couldn't afford to pay the hefty fines imposed for his misdeeds. His debts mounted and he was thrown into Highgate debtors’ prison around 1734.
Download the free Candide App to listen to audio tours from some of the UK's best gardens

Elizabeth now only had her resourcefulness and wit to support herself and her only child. Remarkably, although he was a ‘bad boy’, Elizabeth, a devoted wife, wanted to pay off her husband’s debts to release him from prison.
Before marrying, Elizabeth had learned to draw and paint and had displayed considerable talent. Having spotted a gap in the market, she decided to create an up-to-date herbal, including many new species recently introduced from the Americas for the first time.
She was encouraged to do this by physician and collector Sir Hans Sloane and the Director and Head Gardener of the Chelsea Physic Garden (who provided her with plant specimens to draw). 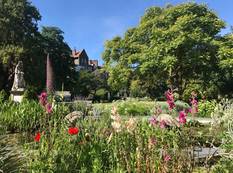 An extraordinary space at the heart of the capital. 17th Century apothecaries established Chelsea Physic Garden, and their work is continued today in its living collection of around 5,000 plants that have changed the world. Tucked away beside the Thames in one of London’s smartest boroughs, the Chelsea Physic Garden is a retreat from the buzz of the city. Within its sheltered walls, rare and unusual plants flourish: walkthrough shaded avenues and admire the gardens of edible, herbal and medicinal plants, colourful floral displays from the Atlantic islands and woodland and wilderness areas. Don’t miss the historical collections in the 100-year-old glasshouses. The Physic Garden Café serves up breakfast and lunch using British produce that you can enjoy while admiring the gardens. The garden shop is a real treat for horticultural goodies and gifts. And a whole host of events runs all year, from workshops to family activities.

Elizabeth took lodgings at 4, Swan Walk, Chelsea, so she was close to the garden and began working on the two volumes of A curious herbal: containing five hundred cuts, of the most useful plants, which are now used in the practice of physick. 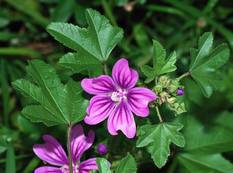 Elizabeth's drawing of Malva
From 1737 - 1739, (during which time she lost her first child), Elizabeth published four plates a week, until she produced 500 exquisitely beautiful and detailed drawings. She then took them to her now locked up husband, who provided their names in several languages and wrote the texts based on his medical knowledge. She personally coloured every single one of the 500 individual images by hand, then engraved each copper plate for printing. (A task which would usually have taken several craftsmen and artists). 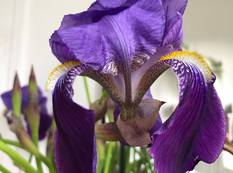 Elizabeth's drawing of an Iris germanica
The President and the governing body of the Royal College of Physicians added authority to the title page, with the painfully understated Latin endorsement of her drawings - ‘we judge very useful’.
Elizabeth, who also proved to be an astute businesswoman, advertised her herbal in several journals and struck deals with booksellers to ensure its financial success. Her comprehensive, beautifully illustrated book became a best-seller, costing about £5 for both volumes. The income from her business paid off her husband’s debts. (A second revised and enlarged edition was printed 20 years later in Nuremberg by Dr Christoph Jacob Trew, a botanist and physician, between 1757 and 1773).
The genus Blackwellia is named after her
On his release from debtor’s prison, her husband, an unchanged character, was soon back to his old ways. He got involved in yet more dodgy deals, and when debts accumulated, Elizabeth was forced to sell part of the copyright.
Finally, in 1742, Alexander left for Sweden alone, where he set up as an agricultural advisor, talked himself into the position of Court Physician to the King of Sweden, unwisely became embroiled in a political conspiracy and was arrested on a ‘trumped-up’ charge of attempting to overthrow the king and government. He was tortured in an attempt to gain a confession and executed in 1747.
Download the free Candide App to get help and answers from a warm community of gardeners

After he sailed for Sweden, Elizabeth never saw Alexander again, but remained intensely loyal, regularly sending him a share of the royalties from her herbal. Not much is known of the rest of her life, but in 1758 she died alone and is buried in the churchyard at Chelsea Old Church, London, a dignified, devoted and honourable woman, to the end.
There is a herb garden in her memory at Chawton House: 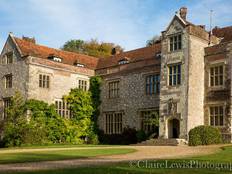 George Forrest (1873–1932) was a robust man who loved the great outdoors, both perfect attributes for a career as a plant hunter.