4
Primulas are our go-to spring bedding plant. We buy more of them at this time of year than any other plant, and I don't know about you but I can't resist them.
What a choice we have! From our common Primrose, Primula vulgaris one of the earliest flowering plants, to the moisture-loving candelabra types P. bulleyana and the hybridised cultivars with their blousy double flowers in all colours, there will be a type that suits your garden and your tastes.

From the diminutive of primus (first, prime), the word primula is given to the flowers that are first to open. Most of the Primula genus do bloom in Spring and can be found from alpine slopes to boggy pastures.
They grow all over the world in temperate climates, across the northern hemisphere to the tropical mountains of Indonesia and southern America. In particular the Himalayas are the home to over half of the known species.
There are about 500 species within the genus and studying the classifications has been a frequent subject for botanists over the last hundred years. The genus is most commonly divided into 30 sections such as Auricula, Candelabra, Denticulata etc. which can either contain many species or just one.

The varieties we mostly see for sale in garden centres and supermarkets are cultivars and hybrids of P .elatior, P. juliase and P. vulgaris. You will also see some named as Polyanthus (occasionally listed as P. polyantha) but they are all Primulas.
Some of the varieties or series' that have been awarded the RHS's award of Garden Merit are: These hardy plants can be planted out into the garden or added to mixed plant containers for a burst of instant colour during these duller months.

The primula we see growing wild on banks and verges here in the UK is P. vulgaris (common primrose), it can be found from Norway all the way south to Algeria (N.Africa) and east to Turkey and Armenia. It prefers moist conditions so thrives in the summer shaded areas of deciduous woodlands or hedgerows. 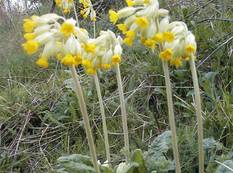 Both the common primrose and the Cowslip suffered from the agricultural practices of the past and being over picked or dug up by us. They are now protected by the Wildlife and Countryside Act 1981 but they can be bought legally from reputable suppliers. Cowslips are now frequently grown on motorway banks where it can't be interfered with easily helping to increase its numbers.

The P. auricula species has been a firm favourite since the 16th century with societies forming to show and breed ever dazzling cultivars, unfortunately, many disappeared during the World Wars. Enthusiasts managed to keep a wide range going and in 1986 organised a show sparking off revival for this stunningly attractive flower. The National Auricula Society is one such group (there are other regional branches) that organise shows and plant sales for those of us that have fallen in love with these delicate beauties. But once it's home you need to show them off, Auricula theatres have become a popular way to house them, providing a backdrop for their dramatic display.
I love the muted yellows and soft creams of the wildflower primulas but the Gold lace and Drumsticks have also found a way into my garden. Whatever your preference, a local store will have something that calls to you and somehow ends up in your shopping trolley. Happy planting!. 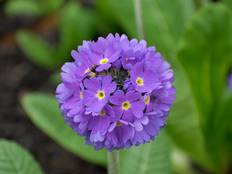 Having a youngster currently going through school means I am constantly being re-educated on English grammar. A quick fact...
15

Doolally over Daffodils? You're not alone!

Take a slow wander through your garden or local park and you'll see the daffodils beginning to show their new growth. It makes...