Please check local COVID restrictions and the garden's policy before planning your visit.
Nothing says autumn quite like the sound of leaves crunching underfoot and the golden and amber hues of foliage glistening in the sunlight.
During what continues to be a challenging year, we should take the opportunity to get outside, connect with nature and enjoy the glorious sights that the season has to offer.
Here are three gardens bursting with colour in the UK this autumn. 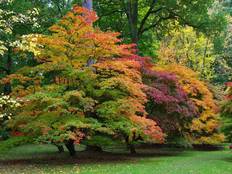 The historic, Victorian picturesque landscape and internationally important tree and shrub collection is managed by the Forestry Commission and supported by the Friends of Westonbirt Arboretum.

Created almost 200 years ago by Victorian horticulturalist Robert Holford, Westonbirt Arboretum is now home to one of the most beautiful and important plant collections in the world. 15,000 specimens and 2,500 species from all over the globe make up this magical tree garden in Gloucestershire.
Managed by the Forestry Commission, it is a botanical experience like no other.
The arrangement of the plants adds to its uniqueness.
‘Most botanical collections are displayed according to scientific criteria or geographic location,’ explains marketing and communications manager Rebecca Hare, ‘we don’t do that here; everything is displayed aesthetically according to picturesque principals, and we focus on creating really beautiful views.’
The world-famous site’s collection of champion trees help to put it on the map. Champion trees qualify by being the tallest or having the largest trunk girth, measured at 1.5m off the ground; there are currently an impressive 140 of these at Westonbirt. 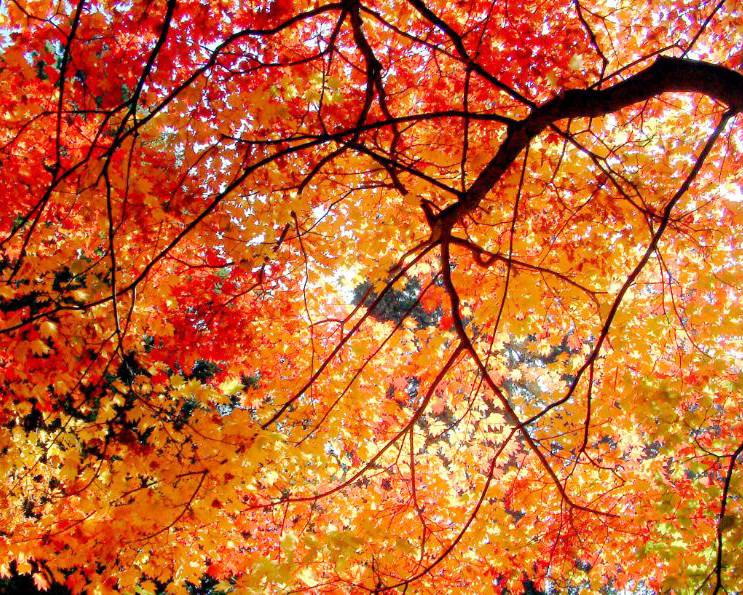 Image credit: flickr.com/photos/anguskirk
With 10,000 of the world’s over 60,000 tree species thought to be threatened with extinction, the team at Westonbirt also work to protect and care for around 100 threatened species listed on the IUCN Red Data list – a list that assesses the extinction risk of plants, fungi and animals. Some of the rarest, categorised as Critically Endangered, include sapphire dragon tree (Paulownia kawakamii) and Madeira mountain ash (Sorbus aucuparia subsp. maderensis). Researchers at the site study how they grow, helping to inform the best ways to care for them and ensure that future generations can enjoy them.

Further, the diversity and vibrancy of leaf colours to be found at Westonbirt are renowned for being particularly stunning during autumn.
‘It’s like a firework display,’ says Rebecca.
The Katsura tree, which originates from China and Japan, really comes into its own during this season. The delightful heart-shaped leaves turn the clearest butter-yellow colour imaginable and emit a mouth-watering sweet fragrance similar to toffee apples or candyfloss. Explore their full tree collection via their interactive map. Image credit: Johnny Hathaway
However, Rebecca claims the breathtaking colour isn’t the only reason you should visit this year. She explains that the peaceful setting can provide a much-needed boost for our mental wellbeing.
So, put your boots on and ‘take a walk through an incredible landscape of scarlet, orange and gold this autumn.’
And, to continue your journey, view weekly ‘Autumn Watch’ videos to see how the Arboretum is looking throughout the season. Image credit: Paul Didden
Picture an entire palette of autumn colours, from rich reds and vibrant oranges to golden yellows, earthy greens and speckles of purple reflecting in the rippling waters of a 50-acre serpentine lake. This is the stunning sight – and something that the Estate’s current co-owner Maria Wingfield Digby calls ‘a breathtaking tapestry’ – that can be captured at Sherborne Gardens during autumn. Designed by the legendary “Capability” Brown, the 42-acre castle gardens at Sherborne are a stunning example of his craft. This Grade 1 listed garden was one of Capability Brown’s first commissions. Using Sherborne Old Castle as his backdrop, he designed the lake in 1753 and reshaped the Pleasure Gardens in 1776, creating the gently rolling landscape we see today. An RHS partner garden, there is something to see all year round – from the spring bulbs to the autumn colours reflected in the lake. **Important:** Contactless entry is available with Candide tickets and we ask everyone to adhere to social distancing guidelines on site. [More details](http://www.sherbornecastle.com/).

Offering 42 acres of Gardens and Pleasure Grounds commanding spectacular views of more than 1,000 acres of parkland, the Garden is ‘the finest example in the South-west of a Capability Brown Landscape Garden,’ says Maria. The Grade I listed Garden has evolved in its Dorset home since the 11th century, and the layout remains largely unaltered today.
The RHS partner Garden boasts many champion trees including the Cryptomeria japonica 'Elegans' (Japanese Cedar) which is a delightful evergreen conifer that transforms colour throughout the seasons. You can witness its blue/green shades in the spring and fresh green foliage in the summer before it turns burgundy-purple and rusty-red in the autumn and winter.
The Salix x sepulcralis var 'chrysocoma’ (Golden Weeping Willow) is a beautiful tree, featuring cascading yellow branches that sweep to the ground forming a leafy curtain of gold and green. Meanwhile, the Liquidambar styraciflua (Gum Tree), with maple-like leaves, displays autumnal fiery reds, oranges and yellows through to eye-catching purples.
‘There’s always something new to see,’ adds Maria, ‘it’s a conceal and reveal Garden. It’s a wow-factor Garden.’ Image credit: Jayson Hutchins
Visitors have the option of following two different walks, one short and one long, to explore the tranquil setting or (take) a bracing walk to brush away the cobwebs’ as Maria puts it.
If you are able to visit this weekend, you’ll be able to immerse yourself in picturesque scenes during the Garden’s special Autumn Colours Weekend. The Tearoom will be offering a takeaway menu while the pop-up gift shop will be selling unusual gifts made locally and on the Estate. Cambridge University Botanic Garden is the most visited garden of its kind in the UK and it’s not just botany students that flock to its extensive collection. Among the visitors are more than 100 species of bird, including a pair of sparrowhawks and the increasingly rare song thrush. Established in 1846, the garden boasts over 8000 species encompassing nine national collections from fetching Fritillaries and elegant Bergenias to unusual shrubs. The much older western side is framed by a canopy of mature trees and home to Systematic Beds, with herbaceous temperate plants laid out to aid teaching. The eastern half of the garden, which was developed in the 1950s opens out onto a drought-tolerant meadow, a scented garden and spectacular planting arrangements. In between, pollinators dance among the bee borders, while those feeling brave should sniff out Titan Arum, aka the Corpse Plant, so-called for its pungent whiff. A visit to Cambridge University Botanic Garden wouldn’t be complete without paying homage to the infamous apple tree, said to be a descendant of the species under which Newton discovered the theory of gravity. Family-friendly activities range from craft workshops to educational talks and tours.

Located just 15 minutes away from the hustle and bustle of Cambridge City Centre is this refreshing 40-acre oasis boasting a huge plant collection of over 8,000 species from all over the world. Since its opening in 1846, the heritage-listed Garden has supported University research and provides a beautiful place for everybody to enjoy and benefit from.

Head of Horticulture at the site, Sally Petitt claims there’s something new to see every day of the year that will excite and inspire.
‘I’ve worked here for 32 years, and I still see things that I’ve never seen before,’ she says, ‘it’s awe-inspiring.’ Image credit: Howard Rice
It’s home to a Stream Garden, a Rock Garden, a Rose Garden, Bee borders and much more, but it’s the dedicated Autumn Garden that sets it apart during this season. Established approximately 30 years ago, it features a large bed of Japanese Anemone x hybrida ‘Robustissima’ and Calamagrostis ‘Karl Foerster’ surrounded by various shrubs such as the Acer palmatum ‘Osakazuki’ that provide interest and spectacular colour throughout autumn. 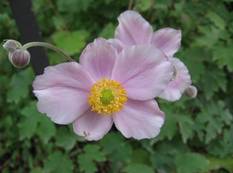 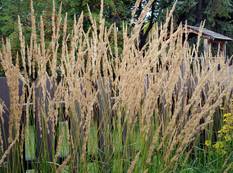 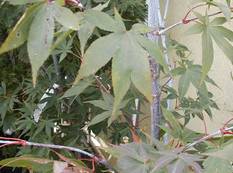 A particular resident of the Autumn Garden guaranteed to attract attention with its vibrant red tones is the American Liquidambar styraciflua ‘Worplesdon’. 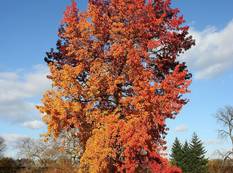 ’It retains its leaves for quite a long time. It’s really reliable, and it always displays these fantastic colours every year without fail.’ Image credit: Howard Rice
Get a whiff of this – another one of the most intriguing plants at the Botanic Garden is the Amorphophallus titanum, otherwise known as The Corpse Flower, due to its unique scent which has been likened to that of ‘smelly socks’ and ‘rotting cheese’. It only tends to flower every 8-10 years, however, and last flowered in 2017. If smelly plants aren’t your thing, each week Sally provides her selection of the must-see plants.
Or if you’re looking for something to keep the little ones entertained, why not join the Autumn Animals Family Trail? This is running until 30th November.
And that’s not all. When the autumn colour has faded, the Winter Garden will come to the fore providing coloured stems, bark and foliage texture with winter flowers and fragrance until mid-spring. Image credit: Howard Rice
Can’t make it to the Garden? Don’t worry; join the team on a virtual ‘Wellness Wander.’ Their incredibly popular weekly videos are set to continue until the end of this year.
Or listen to our audio tours. Whether Wales' finest botanical Garden takes your fancy or escaping to an oasis of calm at Cowbridge Physic Garden, there's a... Why Autumn is the Best Time for Planting

Autumn is the best time to plant most garden plants. Recently, there's been a shift to planting in the spring, but there are... As much as it feels like it, gardening doesn't stop with the end of summer. September to November is the best time to put...