Fresh from planting broad beans and clearing kale, No-Dig expert Charles Dowding sat down with Candide to tell us more about his new online course and what to expect when you cut out the digging.

For those of us who haven’t heard of it, what exactly is No-Dig?

No-Dig is about leaving soil undisturbed so that all the soil organisms, all that abundant life, can do their work without having their homes broken into. You just need to feed them.
In nature, the way that it works is that food lands on the surface. So No-Dig is just copying nature to some extent. You put the mulch, or any organic material on the surface, then soil organisms come up and eat it. In the process, they aerate the soil, and their excretions feed the plants.
You get fewer weeds, fewer pests and disease and, contrary to popular belief (there are a lot of things contrary to popular belief), you need less compost to get better vegetables.

Are you talking about just worms?

Everything! Bacteria, nematodes, fungal networks. By respecting soil ecology, you’re helping so many organisms. The thing is you don’t see them. Everybody sighs when they see a ladybird but what about the nematodes and protozoa? One of the more encouraging things going on in horticulture is this increased awareness of the value of the soil food web - all the interactions going on in well-fed, healthy soil. By not digging, boy, what a difference you’re making.
You’ll read old gardening books that say you have to dig to expose the pests for the birds to eat, but there’s no mention of the beneficial things which get eaten too. There are a lot of contradictions in horticulture - a lot of old statements that if you analyse make no sense at all.
Download the free Candide App to get help and answers from a warm community of gardeners

So how did you discover No-Dig?

It was back in 1982, preparing my market garden. I made some raised beds on an acre and a half and thought, hang on a minute, I don’t want to rotovate again because my lovely beds will be destroyed. So I read up on No-Dig and took it from there. It just felt like the right thing to do.
The first book I read was The Ruth Stout No-Work Garden Book: Secrets of the year-round mulch method - obviously a bestseller. She used old hay as a mulch as her husband was a farmer. So I bought a load of old hay and just got a load of slugs. And I thought this was really odd; she never mentioned slugs in the book. She is also based in Connecticut, a totally different climate to ours. This is where the details count. In this climate, you want compost; a ready-made food that doesn’t harbour pests.
Back in the 80s, I was almost doing it subconsciously, not making a big noise. It wasn’t until my first book, Organic Gardening: The Natural No-Dig Way caused quite a stir that suddenly many people became aware of No-Dig. Since 2007, I’ve also been conducting some experiments, so I have more and more evidence to convince people. Then they’re having a go, getting amazing results and telling their friends.

Is there a large No-Dig community?

Yes, for sure and among market gardeners too - I actually have a logo being adopted by more and more gardeners. My partner Stephanie Hafferty, who co-wrote one of my books with me, also set up the Facebook group ‘Undug’ that now has over 15,000 members. So it has become quite the movement.
I guess you could argue, in a funny sort of way, that a No-Dig approach helps you develop a better understanding of the world. Looking through the prism of soil you’re seeing that sometimes intervening less is better.

What can people learn from your new online course?

The course is split up into sections. The first focuses on why No-Dig works so well and about its history, as well as what kind of results to expect. Then I go on to look at different soils. I’ve gardened on clay, stony soil, silty soil and results have been equally as good because it doesn’t matter so much what’s below as you’re building a surface.
Next, I talk about my trials and what they can teach. I then go on to look at site layout - why you might want to lay out your beds in certain directions, whether they should be raised or not etc. I also talk a lot about paths not just being ground to walk on but fertile soil to feed plants -- about making the most of certain areas.
Then there’s a whole section on how to get rid of weeds. This is the main stumbling block for people I've found.

A lot of the Candide community would say weeds were a ‘constant battle’.

A constant battle! That’s exactly it. But if you do clever mulching, then you can get rid of weeds in year one, and that’s what I explain in greater detail. The time you save not battling weeds is one of No-Dig’s greatest benefits.
The next section looks at what exactly soil and compost is, how to make different composts and the different effects on growth.
Finally, I have two little lessons looking at the history of cropping in two of the small plots that I’ve worked on for about six years. This to give an example of using No-Dig in a small space, to illustrate what you kind of results you can expect.
Also at the end of each section, there’s a quiz — 20 in total. If you get them all right, you get a certificate (you can always go back and reset it if you need to cover a topic more thoroughly). The quizzes are designed to increase your knowledge and means that people will have a small but tangible result.
The emphasis is on what you can learn to better understand what's going on. I’m not giving recipes. The course is designed to empower people with knowledge so they can go out and be creative and work things out in their own situation.

Have you more online courses planned for the future?

I’d like to do one on small space gardening. If I get time this winter, I’d also like to write one on the details of growing great vegetables. Methods of sowing, planting, covering, fleecing over, crop protection, dealing with insects, harvesting methods, likely yields and that sort of thing. But I’m just trying to focus on this one at the moment, plus all my other teaching, and gardening!
I’m not necessarily hoping everyone will do this course, but I would urge every gardener to look at the possibilities of No-Dig as we find out more and more about it. It's not difficult, it's within everybody’s grasp, it requires no machinery or gadgets so it is relatively cheap, and the benefits are fantastic. Maybe you need to spend a bit more time composting in year one, but once you get through that, boy you’re laughing.
You can find out more about Charles and his new No-Dig online course from his website. https://www.charlesdowding.co.uk/ 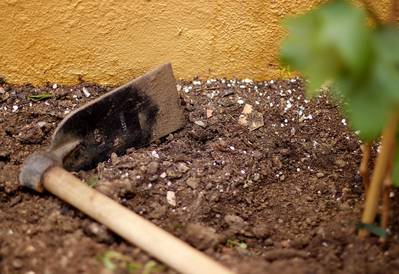 Understanding the soil type in your garden is key to making the most of your garden. Here's a quick guide to identifying your... The soil isn't just clay, it's interlinked with barbed wire fencing from the 1940's, bits of broken pottery, sharp glass and... 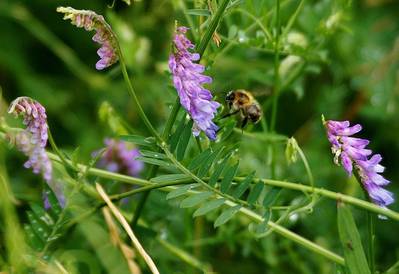 Green Manure: What is it and why use it?

If you have bare ground you could always try growing green manure as it's a good way to increase protection and soils...