Written by Carolynn Whorton
Designed by acclaimed Dutch gardener, Piet Oudolf, the contemporary Scampston Hall Walled Garden in Malton, North Yorkshire is simply magnificent.
Oudolf is considered a leading figure in the New Perennial Movement, and a visit to the Walled Garden at Scampston Hall is a fantastic opportunity to see this style of gardening. This naturalistic approach aims to recreate wild, organic landscapes using a range of herbaceous perennials and grasses that are carefully chosen for their structure and form.
The Walled Garden remains Oudolf’s largest private commission in the UK, and the chance to see this influential form of gardening up close is a must for gardeners of all levels. Made up of several ‘garden rooms,’ visitors can explore each section of the landscape, starting with the Plantsman’s walk that edges three sides of the garden.

The Plantsmans Walk
The garden design was commissioned in 1999 and sits within Scampston Hall’s original 18th-century Victorian walled kitchen-garden. These were once filled with four acres of fruit and vegetables, grown by over 30 gardeners.
Download the free Candide App to see gardens listed all over the UK and Ireland

Explore this space nowadays, and you’ll find a small kitchen garden that’s used to grow seasonal fruit and vegetables. Next to this is the Cut Flower Garden, where flower arrangements are prepared ready to be displayed in different rooms around the Hall.

Cut Flowers and Vegetable Gardens
The Silent Garden is another breathtaking area designed by Oudolf. Although given its name because of the minimalist feel, visitors will equally be lost for words by the simplistic beauty! Twenty-four striking Yew Columns stand tall around the square mirror pond. You won’t find any plant life in the pond, so there are no distractions from the reflective qualities of the water.

The Silent Garden
Another impressive area is the Perennial Meadow, complete with oval pond and the central fountain. The surrounding borders are made up of plants that support one another and complement each other's natural growth.

The Perennial Meadow
In other areas of this wonderfully thought out Garden, you’ll see symmetrical shapes, waves of grasses and Oudulf’s signature sweeping shaped Yew hedges.
The Spring and Summer Box Borderers are characterised by the box plants that run down their central length. As their names suggest, planting in each area is angled towards their respective seasons, but the borders remain impressive all year-round.

The Spring and Summer Borders
It’s best to finish any walk around Scampston’s Walled Garden by climbing the steps and standing on the viewing platform in the mount garden. As well as offering impressive views of the individual garden rooms, you’ll also find Prunus Yedoenis, Camassias and the Lycopodium.

The Mount
Now home to Christopher and Miranda Legard and their family, Scampston Hall country house opens its doors to the public during a short period in the summer months, allowing visitors to enjoy a guided tour of the magnificent building. During open season, it’s best to book in advance to avoid disappointment.
The Legard’s have lovingly restored this beautiful building, and unlike many other country houses, you won’t find any roped-off areas, and it’s not unusual for groups to see some of the family pottering about their home!
The Parkland that overlooks the Main Hall is also is not to be missed. You can gain access to the park when purchasing your ticket for the Walled Garden. Made up of 80 acres, there are various trails that you can walk during your time in the Parkland, including the Cascade Circuit and the Parkland Trail.

Lancelot ‘Capability’ Brown designed the landscape of many country estates in the eighteenth century, including the Parkland at Scampston Hall in 1782 and is remembered by many as England’s Greatest Gardener. You’ll see his influence in features including the ‘ha-ha’ (or sunken fence), Palladian bridge and the cascade.
Families are welcome at Scampston, and there are plenty of things for children of all ages to see and do in the gardens. Explore the different areas of the landscape on the Nature Trail to learn about some of the local wildlife. Children can also pick up an Explorer Pack from the Ticket Office to discover more about all nature has to offer during their visit.
The Cascade Circuit trail in the Parkland includes the Fairy Forest which is great to explore with young children. There are also special events for children throughout the year, including craft activities, bug hunts, storytelling sessions and other games.
The William Richardson Conservatory was originally built in 1894 and has since been restored thanks to a significant grant from the Heritage Lottery Fund. The Conservatory is used as an educational space by visiting schools and also plays host to many lectures, workshops and courses throughout the year.

Named Small Visitor Attraction of the Year in the White Rose Awards in 2017 and winner of a Yorkshire Bloom Gold Award in 2018, Scampston Hall is now a popular wedding venue and is also available to hire for various corporate events.
Scampston Hall Walled Garden is open to the public from April to October, 10 am until 5 pm Tuesday to Sunday (including Bank Holiday Mondays.)
Scampston Hall Walled Garden Audio Tour is now available to download for free in the Candide app.

As can be expected of a country house of this size and stature, there have been many owners of Thornbridge Hall over the... 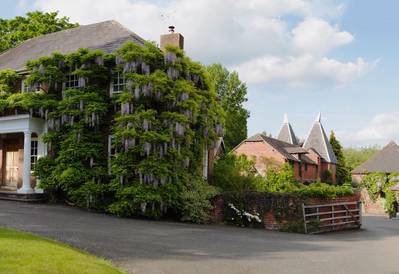 What this garden might lack in size, it certainly makes up in beautiful scenery and colourful charm. Famed for its vast...