The History Behind These 5 Festive Plants

It’s hard to imagine Christmas without boughs of Holly sculpted into wreaths, Mistletoe hanging above the doorway and of course, a Christmas tree sparkling with tinsel and lights taking pride of place. But how did these plants become part of our holiday traditions? Discover who really brought Christmas trees to the UK, how one family made Poinsettias a commercial success, and why Celtic druids loved holly as much as we do.

It’s popularly believed that Prince Albert, husband of Queen Victoria, was the first to bring the tradition of a Christmas tree over from Germany. Still, the credit actually lies with Queen Charlotte, the German wife of King George III. In 1800, she set up a Yew bough covered in candles and treats in the palace and the tradition caught on with England’s wealthy families. Albert’s contribution was using a tree; it was the illustrations of the queen and her family gathered around their candlelit Fir, published in the 1840s, that firmly lodged the image in the public imagination.
Though artificial trees are becoming a popular choice, Pine wins over plastic every time in our book and a real Christmas tree is green in more ways than one. Studies by the Carbon Trust indicate that plastic trees create around 40kg of CO2 emissions compared to a maximum of 16kg from a real tree if disposed of in the landfill. If burnt or planted the emissions are negligible, so decide the best way to dispose of your tree before you buy it -- and opt for a tenacious Noble or Fraser Fir if you don’t want to spend Boxing Day picking needles out of the carpet.

Like the holiday of Christmas itself, the significance of the Holly plant has pagan roots. As an evergreen, it was used to celebrate the Winter Solstice, with the Celts and Romans adorning their homes with holly and Ivy to guarantee the return of spring. Christians adapted to this tradition using the spiky leaves to represent the crown of thorns, the red berries to symbolise the blood of Jesus, and the plant's evergreen nature to signify the everlasting life promised by the church.
Today, Holly is an essential part of the holiday; formed into wreaths and featuring in the lyrics of almost every carol you could sing, and it’s just not Christmas unless you’ve decked the halls with boughs of it.

It’s easy enough to see why Mistletoe is used in Christmas decorations. The clusters of white berries on these evergreen sprigs provide an eye-catching contrast to the red found on Holly, and as a parasitic shrub common on trees like apple and poplar it’s easy enough to find. But the tradition of why we kiss under the mistletoe is a bit more difficult to pin down. Some sources suggest that the Celts saw it as a symbol of fertility, living on even when the deciduous host tree loses its leaves. 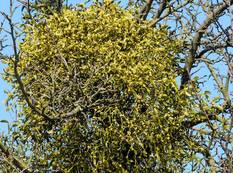 Another school of thought attributes the mistletoe kissing to Norse mythology when the goddess Frigg declared the plant a symbol of love after killing (and helped to resurrect) her son Baldur. However, this myth also varies wildly in the telling -- in some versions, Baldur remains dead, and the Mistletoe berries represent Frigg’s tears of sorrow. Regardless of the origin, kissing under the Mistletoe has become a pop culture cliche, and it’s doubtful that its role in cheesy Hallmark movies and awkward office parties will change anytime soon.

The Poinsettia’s history as a festive tradition is one that echoes twin drives behind the holiday itself -- religion and commerce. This plant originates in Mexico and as the folk legend goes, was created when a young girl taking part in the Christmas celebrations couldn’t afford a gift for the infant Jesus. The bunch of weeds that she offered up were instantly transformed into the bright Poinsettias when she placed them on the altar.
In the 17th century, the plant was used by Franciscan friars to teach people about Jesus’s life -- the star-shaped leaves represented the star of Bethlehem, and their colour was used to symbolise the blood of Christ. 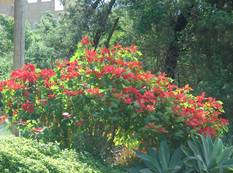 With its distinctive red leaves (often mistaken for petals), Poinsettias caught the eye of cultivators including Joel Roberts Poinsett, the American ambassador to Mexico in 1825 who would eventually give them his own name. But how did Poinsettias become such a major part of the Christmas tradition? It’s all down to the Ecke family. They had been selling the plants in the USA since the early 1900s, but it wasn’t until the 1960s that they really upped the ante by sending free Poinsettias to television studios to use as set dressing between Thanksgiving and Christmas. And it worked -- today, over 100 million of the plants are sold worldwide in the six weeks run-up to Christmas alone.

Native to the rocky mountains of Brazil, the Christmas cactus has been cultivated in Europe since the early 1800s and the association to the festive season seems to be because it blooms in the winter -- it’s known interchangeably as the Christmas cactus, Thanksgiving cactus, and holiday cactus. (There’s also an Easter cactus with a similar appearance -- no prizes for guessing when this one blooms.) 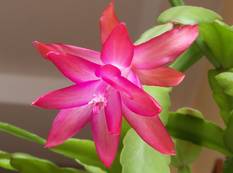 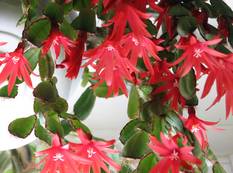 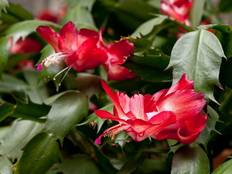 But the lack of any ancient legends or cultural connection to Christmas doesn’t seem to have hurt this plant’s popularity too much. The last five years have seen cacti and succulents becoming the home decor trend du jour, and with many people living in apartments without outdoor space, houseplants are more popular than ever. With its pretty pink flowers blooming in the bleakest midwinter, the Christmas cactus is a small, low-maintenance way to add festive cheer to your home (and makes a great gift for any budding gardeners on your Christmas list).