The Ultimate Guide to Thrips: How to Identify and Get Rid of Thrips on Houseplants

Everything you need to know about plant Thrips

The common Thrip is a wide-spread nuisance among indoor gardeners, sucking the sap from an unfortunate host in return for yellow lesions on its failing leaves. Thrip infestations can appear in a matter of days, with the winged mother laying around a hundred eggs in her life. The typical lifecycle for a Thrip can be upwards of forty days and quickly develop the ability to cause significant damage to the foliage shortly after hatching. With this in mind, it's essential to catch the infestation early.
This article will include information on the lifecycle of Thrips, which plants are at most risk & approaches to dealing with such infestation. 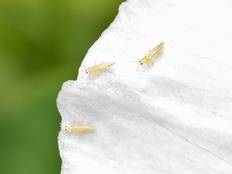 The individual Thrip can measure to only 2mm (0.08 inches), so a runaway specimen can become almost impossible to find accidentally. There are several stages of a Thrip’s life to look out for, but its appearance is practically the same throughout its forty-day lifespan.

Plants most susceptible to Thrips

Unfortunately, most plants sold for indoor use are at risk of an infestation; however, there are some families, like the Cactaceæ (Desert & Jungle Cacti) and succulents , which are exempt from an attack. The most common plants to be engulfed with Thrips are Palms, Dracaena (Dragon Trees) and members of the Aroid family (Alocasia, Chinese Evergreens, Dieffenbachia, Monstera, Peace Lilies, ZZ Plants). Thrips generally like broad, thin leaves that can host large numbers of eggs and nutritional sap. 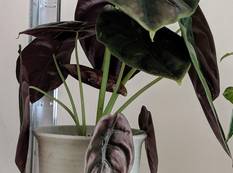 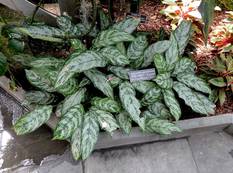 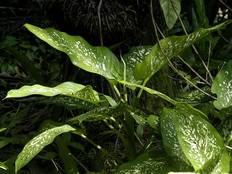 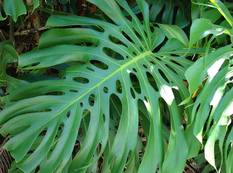 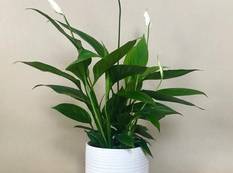 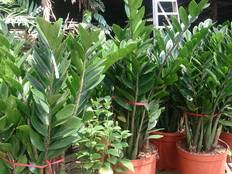 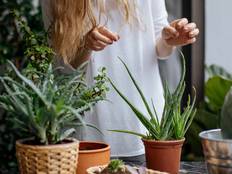 The Life-Cycle of Thrips Lasts 40 Days

The time-expectancy of each stage is an averaged estimate. Higher temperatures and the type of species can increase the speed of development considerably.
Eggs - Days 1-3
Most infestations will develop from mid-spring onwards and can last through to the autumn in high numbers. After this period, reproduction levels can drop, resulting in some form of dormancy until the following spring when temperatures and daylight hours increase. Its first stage of life will find itself being laid in the plant's cubbyholes, like the creases of its leaves or between the stems and petioles. The eggs will begin to hatch within a few days, developing the ability to crawl within the hour.
Instar - Days 4-8
This stage of the insect's life is most crucial to its success. Without proper nourishment and a viable home to dominate, the wingless larva could begin to flail and weaken. If the host's greenery can support life for this Thrip, it'll quickly begin to 'scrape' the leaves in search for its favourite meal - the sap. The 'Instar' stage is where the infestation's symptoms start to become visible to the indoor gardener. As around a hundred eggs will hatch simultaneously, the infestation will go from 0 - 100mph in the space of a few days, followed by the development of the first yellowed legions of its leaves.
Pre-Pupa - Days 9-12
At this stage, the Thrip would have almost aced its strength and agility to begin crossing over to nearby plants. Although they still haven't developed the wings to fly to further distances, its innate desire to search for more hosts will pose a significant threat to other plants that are resting on the original's foliage.
Pupa - Days 13-18
This is the last opportunity for an indoor gardener to keep the infestation on the host plant, before the Thrip’s wings mature. Once this stage has been completed, it’ll have the ability to begin reproducing and flying to other plants without the home. Due to its minute size of 2mm (0.08 inches), the individual critter will continue to go unnoticed and is only visible accidentally in large numbers.
Adults - Days 18 & Onwards
The adult Thrip will continue to roam the original host in favour of fresh, untouched greenery. As mentioned before, this is the first stage of the critter’s life that is truly immobile. Not only can the Thrip travel airborne across the house in search of new plants, but it can now finally reproduce and lay over three hundred eggs in its lifetime. At this point of an infestation, total eradication will involve thorough consistency and a good quarantine to bring the pests to a halt.

Before reading this section, it’s important to acknowledge that combatting an infestation (regardless of pest species) requires both patience and consistency. The first section discusses the actions in which you should address an attack, whereas the latter section mentions the pros and cons of choosing either an organic or chemical-based pesticide.

How to treat plants with Thrips

1. While using a damp cloth, destroy as many bugs and their larvae as possible. Any flowers must be removed along with the worst affected leaves or stems.
2. Take the plant outside and GENTLY wash the stem, leaves and each cubbyhole using an outdoor hose. It's important to spray in at least three different angles towards the specimen to ensure thorough administration.
3. While the plant is drying-off, remove the top quarter of the soil in favour of a fresh batch of the appropriate product - ‘Cactus & Succulent’ compost for arid-dwelling species, tropical plants for ‘Houseplant’ labelled potting mixes, etc. It's vital to replace the soil, as once summer arrives, any burrowed larvae may hatch and continue to wreak havoc on the hosting plant.
4. Perform a final hose-down before placing it in a warm room, away from other specimens to dry-off. If the temperature is above 15℃ (59℉), keep it outside so that natural predators, (like Ladybirds and Green Lacewings) can have a go at the critters.
5. Once the specimen is bone-dry, it's time to administer a pesticide. Although there is a choice between two options (organic or chemical-based sprays), we would highly recommend using the latter option, due to the pest's ability to bypass organic varieties.
6. Keep the affected plant away from others in a quarantined room until the symptoms have subsided for at least four weeks. Always be wary of a relapse, and keep an eye out for possible outbreaks for several months after the last sighting.
N. B. - Although you should perform the wiping and hosing-down process BEFORE each pesticide application, you can wipe/wash the foliage at any given time to keep the infestation under control. Remember to respect the pesticide’s recommendations though, as frequent applications could result in burnt foliage.

Which treatment should you choose?

Organic Pesticides
Neem Oil is used across the world, and for a good reason. Not only is it accessible in many stores, but it'll also get to work after the first application. Dilute the liquid, (to the manufacturer's recommended strength) with water and/or dish soap and spray thoroughly onto the foliage and its cubbyholes. Any flowers must be removed instead of misted, due to the heightened chance of another infestation lurking in the background.
Insecticidal or Horticultural Soap is another popular pesticide on the market, and there are three versions to consider. The first way is by purchasing an RTU (ready-to-use) spray bottle, which can be immediately used on the plants. Although most garden centres will stock this, it's far more economical to purchase the second option - concentrated bottles. This method comes with pro's and con's but is far cheaper to use if you have multiple infestations. It's self-explanatory and highly beneficial for the outbreak as long as you use the correct levels of dilution - the only downside is its availability in local centres. The final and most affordable way is by making it yourself. There are three ingredients in creating your own insecticidal soap - a vegetable, tree or nut-based oil, non-fragrant dishwashing soap and tap water. Most oils are acceptable, with the most successful being vegetable, sunflower, neem and olive oil. Add two parts oil, one part dishwashing soap and eight parts water to create the dilution. Although it's best to fresh bottled water, tap water that has been allowed to sit for 24hrs will also be fine. Spray the dilution thoroughly around the plant, empathising both the infestations and the potential-hit areas. This method must be performed weekly over a month or two, along with regular pest inspections - as soon as you see a bug, crush it!
Natural Predators (unrecommended) - The last non-organic method is by acquiring adult ladybirds or green lacewings. This method can take several days, if not weeks, to work and could even be unsuccessful, which is why other products are favoured.
Chemical Pesticides
We'd recommend using 'Bayer Garden Provado Ultimate Fruit and Vegetable Bug Killer Concentrate', as it worked IMMEDIATELY after one application. It's a concentrated product, meaning that you'll have to dilute it with the appropriate amount of water. Spray both sides of the leaves, along with any cubbyholes that could house the infestation. Keep the plant away from other specimens once there are no signs of an outbreak for over a month.
If you're looking for something with even more strength, try an Isopropyl Rubbing Alcohol, which can be bought from many online stores. This pesticide will work immediately, killing the bugs within a few hours of contact. Follow the manufacturer's recommendations and repeat hosing the plant down and pesticide application steps fortnightly until the infestation has elapsed. Keep it well away from others until the plant is deemed safe.

How to Control Thrips on Houseplants

Treating houseplant pests can be tricky. There are as many ways of getting rid of pests and diseases from houseplants as there... 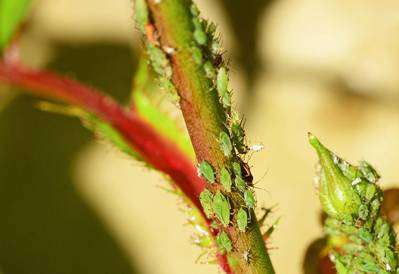 These are one of the most common garden pests and can be found on all sorts of plants both indoor and out. They live by...

Ficus Elastica is a fine broad-leafed plant with thick rubbery leaves which appreciate an occasional misting in summer. This...