Gardeners’ hopes of indulging in springtime floral extravaganzas have been dashed after the RHS Malvern Spring Festival became the season’s first major casualty of the Covid-19 pandemic – while the world-famous RHS Chelsea Flower Show has been postponed until autumn.

The global health emergency saw plans to stage Malvern’s spring spectacular on 5-9 May scrapped, while for the first time in its 108-year history, RHS Chelsea will become a celebration of the season of mists and mellow fruitfulness when it takes place in the grounds of London’s Royal Hospital on 21-26 September.
The organisers of RHS Malvern Spring Festival are pinning their hopes on the national vaccination programme driving down Covid infection rates so they can stage the RHS Malvern Autumn Show on 25-26 September. Despite plans for reduced numbers and an extra day at the spring festival, a Malvern spokeswoman said: “With the current level of uncertainty around outdoor events, we are not going to be able to create a spring festival this year.” Ticket holders are being offered refunds or the opportunity to roll-over for 2022.
The four-month delay presents huge challenges for Chelsea exhibitors. Garden designers, who spend 12 to 18 months planning Main Avenue show-stoppers, commonly feature classic late-spring plants such as Allium, Iris, Foxglove, Poppy and Lupin, whereas the Great Pavilion is crammed with spring and summer glories including Rhododendron, Peony, grasses and the bounty of harvest festival.

What does this mean for plant nurseries?

Hardy’s Cottage Garden Plants, which first exhibited at Chelsea in 1992 and holds 24 RHS Chelsea gold medals, was due to stage its final Chelsea spectacular this spring with a 160 square metre display packed with up to 7,000 plants of more than 120 varieties, aimed at helping gardeners to choose the best plants for pollinators. But Hardy’s plans have had to be abandoned.

Pictured: Rosy Hardy
Speaking about the display, sponsored by Candide, Rosy Hardy said: “We will carry on with other shows but we won’t be back at Chelsea. We geared-up for a spring show and while September is a lovely time of year, we don’t have big plants to stage a display in autumn. Our plants will continue to appear in Chelsea gardens in future.” 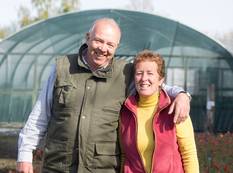 The news that the Chelsea Flower Show was scrapped for the second spring in a row was initially met with disbelief by one veteran exhibitor. Vegetable guru Medwyn Williams, of Medwyns of Anglesey, said: “I was initially very disappointed but, in fact, an autumn Chelsea will benefit us immensely. It’s much easier to grow Chelsea standard plants through summer, whereas over winter we need lots of heat and light. Fruit can be exhibited, which is impossible in May. Chillies, aubergines and peppers will inject colour into autumn displays.”
Thorncroft Clematis had withdrawn its Chelsea application prior to the event being postponed. Owner Peter Skeggs-Gooch said: “Retired staff and friends help to run displays for us. Due to their potential vulnerability to Covid, I couldn’t ask them to volunteer if it might not be safe. A September Chelsea is fascinating. Had it been announced sooner, we may well have thought differently.”
It was a similar story at houseplant specialist Dibleys. The nursery’s Paul Johnson explained: “Because of Covid, we decided to give Chelsea a miss this year. A September Chelsea based around autumn colour would be fine, as we sell plants year-round.”
The RHS confirmed it is delaying Chelsea until later in the year “when millions more people will have been vaccinated and it is likely that levels of infection will have reduced substantially”. Everyone who bought a Chelsea ticket will be contacted.

Pictured: Chelsea 2018 Credit: RHS/Neil Hepworth
Candide asked the RHS if garden designers and nurseries backed the show’s delay if the autumn Chelsea would be the same size as the spring event, what steps are being taken to ensure Chelsea does not duplicate the Malvern autumn show’s content and, if successful, if an autumn Chelsea could become an annual fixture in the show calendar. With the RHS expecting losses of up to £18million in 2020, we enquired about the financial implications of postponing Chelsea. An RHS spokeswoman said: “At this point in time we have nothing further to add.”