The Strange Vegetable That Flowers Underground

by chris_dagorne. All rights reserved 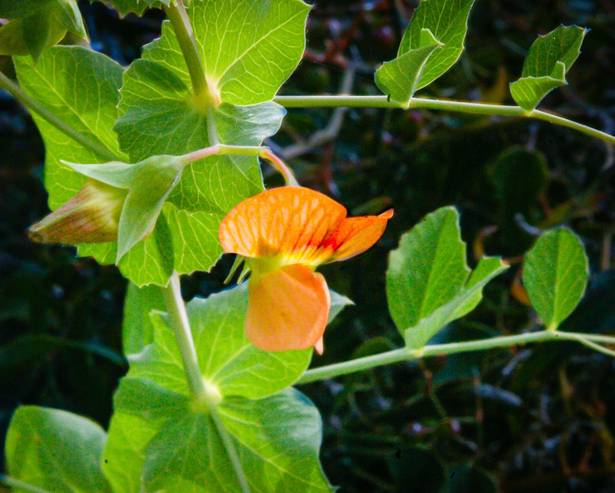 They’re the most mundane of foods - the Dido of the dinner plate - so you might not expect the humble pea (Pisum sativum) to be hiding any dirty secrets. But scientists have just described how an ancient ancestor of this vapid vegetable (the snappily-named Pisum fulvum) chooses whether to hide its flowers underground.
Israeli scientists, writing in the journal Plant Science, have been digging around in the genetic code of Pisum fulvum (known to her friends as ‘P. fulvum’). This pretty pea plant, found throughout the Middle East, can actually produce flowers either above or under the ground. In fact, P. fulvum appears to ‘decide’ whether or not to produce flowers below ground depending on environmental conditions. Seeds grown in finer, sandy soil are more likely to develop underground flowers (and fruit) than those planted in a heavier soil. 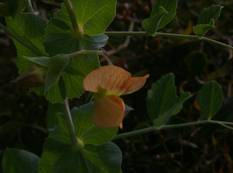 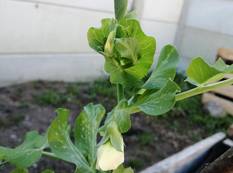 Why Do Plants Flower At All?

It might seem like flowering underground is a bit pointless, but it can help little P. fulvum to survive drought and even fight off (OK, not literally) the hungry mouths of grazing animals.
Most of us learn in school that the whole point of flowers is to attract pollinators, mixing up the genes between different plants of the same species. And sure, that’s a good reason to produce flowers. Flying pollinators can also help spread a beneficial gene far further than its parent plant could manage, as, after all, plants don’t often pull up their roots and run around (except perhaps Tumbleweed). A plant which evolves, say, a bitter-tasting leaf that deters caterpillars, could quickly pass on that trait to the offspring of other plants in its neighbourhood with the help of a friendly bird or bee. 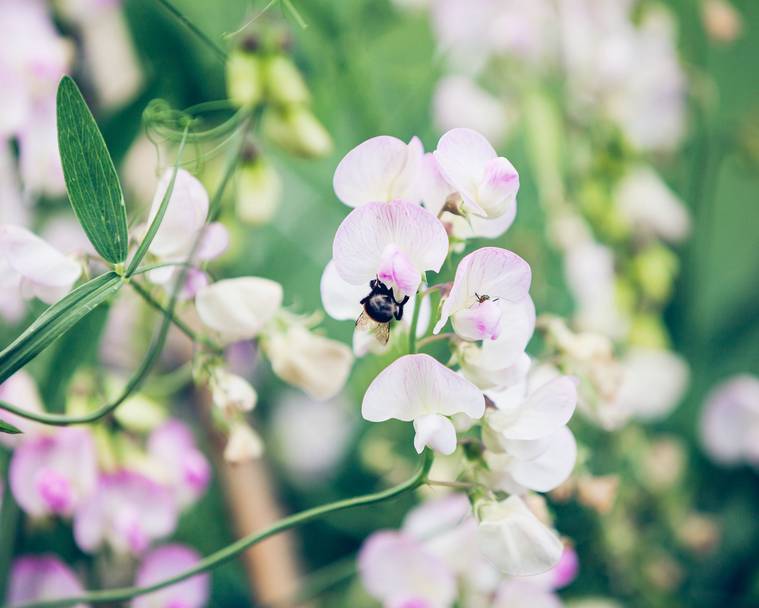 Pollinators can spread beneficial pea plant genes far and wide
But in P. fulvum, and several other families, plants can choose to produce self-pollinating flowers underground. These flowers develop straight into seeds that are an exact genetic copy of the parent plant (because there’s no mixing of genes through pollination). The beauty of this is that the seeds are protected from grazing animals, fire and drought (as their early roots are already deep down in the wetter bit of the ground). So P. fulvum has hit upon a pretty nifty trick that might also protect the species against the effects of a warming climate and the invasion of its native habitat by grazing cattle.
But when does the plant decide where to flower? Well, according to the scientists, by 3-5 weeks after germination a P. fulvum plant destined to bury its head in the sand will have already started to produce little branches below the surface.

Geocarpy - the reproduction of a plant via underground flowers - might be more widespread than you expect. In fact, a well-known pub snack, popular among those who don’t mind fishing for food in a bowl of germs, also comes from subterranean flowers. Yes, the mighty peanut (Arachis hypogaea)! But this plant doesn’t switch between two fruiting strategies or rather, ‘change its mind’. According to our resident scientist, Dr Waheed Arshad, after flowering, the flower stalks bend down to the ground and the dying blooms are sort of unceremoniously shoved into the soil. Yes - the peanut actually plants itself! 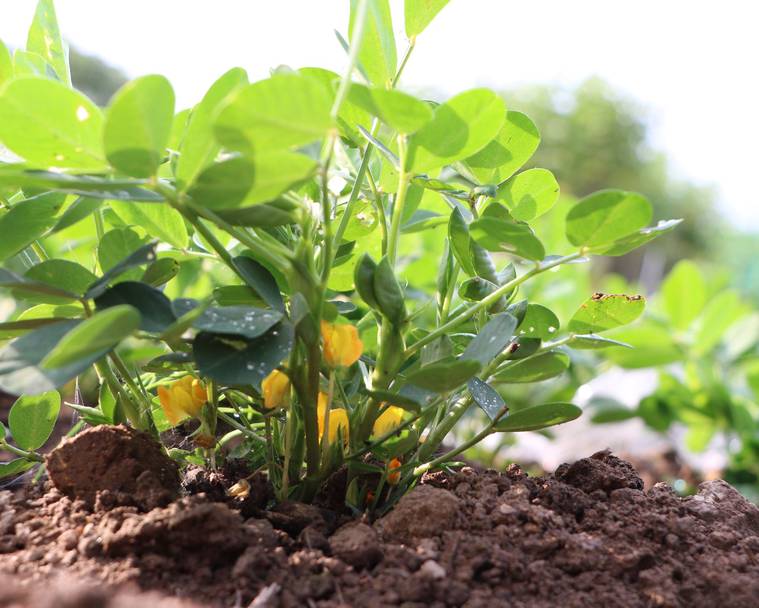 After flowering, peanut flowers bend down to 'kiss' the soil

The way that P. fulvum chooses between flowering above or below ground is called ‘amphicarpy’, and we do know of a few factors that flip this mysterious switch (besides the soil type). Irrigation is one of them - flooding plants with as much water as they could possibly need seems to keep the flowers above the ground. And then there are cattle - according to the scientists, ‘grazing pressure’ can cause P. fulvum to opt for subterranean blossoms that are beyond the dangers of the munching zone.
P. fulvum is a great example of evolution responding in weird ways to survive in a harsh environment. Mother-in-Law’s Tongue (Sansevieria trifasciata) is another - they seem to ‘hold their breath’ during the day to avoid losing moisture in the desert, while the insectivorous plant Utricularia macrorhiza can grow more insect traps in response to changes in water conditions.
Buy Sansevieria in the Candide Marketplace
You can find out more about little P. fulvum and many of its weird and wonderful relatives in the Candide Knowledgebase, where we have handy plant care information for many thousands of house and garden plants. 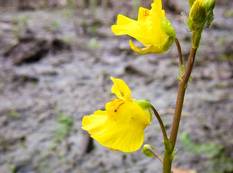 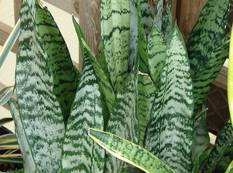 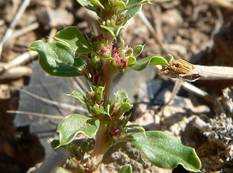 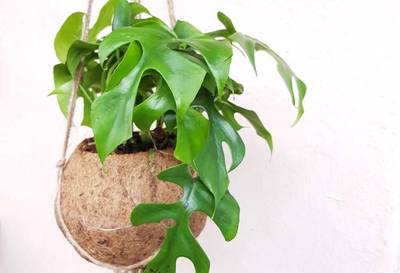 New Rare Plants in the Marketplace

Gorgeous new rare plants are piling into the Marketplace this week. Here are some of our favourites. 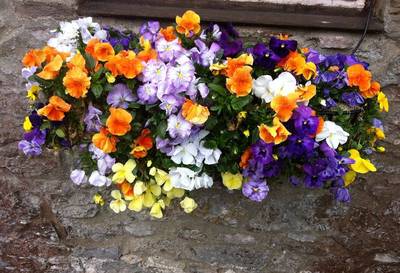 What Flowers to Sow Now for Beautiful Winter Displays

Because the seeds are small and often quite expensive, it pays to sow these winter flowering bedding plants in trays filled... 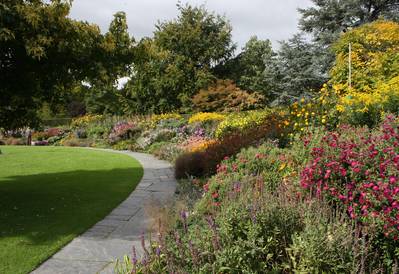 What to Do in the Garden This July

Your garden should be full of growth and blooms this month. So if it's long-lasting, abundant blooms you're aiming for this...