12th Century house and cottage-style gardens by the River Ouse. 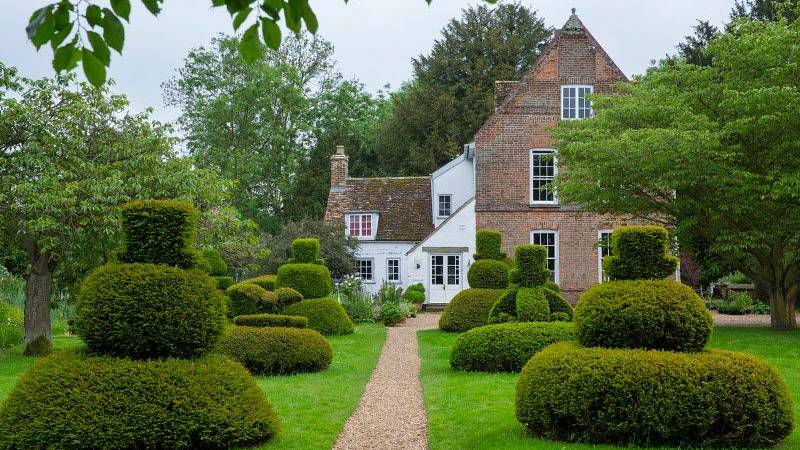 First impressions are deceiving at Hemingford Grey, where this apparently Georgian facade masks one of the oldest continually inhabited houses in Britain. Behind the red brick lies beautiful stonework from c.1130 in the original rooms, and a fascinating history. Sitting proud on the banks of the River Ouse and previously owned by children’s author, Lucy Boston, The Manor now houses an internationally-important collection of patchwork quilts.

Relative to the medieval origins of the house, the cottage-style gardens are a fairly recent addition, crafted lovingly in the war and post-war years from two adjacent fields and bordered on all sides by water, with a moat connected to the river. There are four acres in total, with one acre left for nature, and the combination of natural and cultivated garden is rich in wildlife. The grounds are now a riot of colour in the spring and summer, with many naturalistic herbaceous borders, including a beautiful collection of bearded irises, and a lovely wildflower meadow, where fritillaries and marsh orchids grow. Don't miss the hidden garden, which is home to flowering Cherry Trees in spring and mature Yews which are beautiful year-round.

Along the path down to the river are impressive examples of Yew topiary, planted during the war by Lucy Boston, who was also responsible for the property’s sensitive restoration to its Norman roots.

Mostly inaccessible (some paths moderately flat and paved). Paths on lawn and gravel.

A great day out! A very interesting tour, which you'd love if you like History and very old houses. Was a bit expensive. The gardens were beautiful with loads of flowers.

This is a magical place- particularly if you have read the book as a child. We were lucky to have glorious autumn sunshine. Wandering around the garden after putting our £5 in the honesty box was an absolute pleasure. So much still in flower. We weren't able to tour the house but that's something to save for another day.

A truly amazing place. Visit by appointment only, but well worth it. The manor is full of history and the gardens are fabulous.

Visited yesterday, as I was in the area. Was really looking forward to seeing the gardens at the very least, as we had not booked onto the house tour. However, as another couple had made a mistake with their booking and not turned up, we were very kindly allowed a tour of the house! My sister and I were thrilled to bits! We were shown around by a lovely, and extremely knowledgeable local lady. The Manor has so much history, and it came to life with the knowledge and enthusiasm of our tour guide. Lucy Boston’s patchworks were out of this world, and if you’re familiar with the Green Knowe books, this place is simply magical. The gardens are beautiful, jam packed with an array of flowers, and lots of secret areas, with plenty of seating to sit back and enjoy. At the end of tour, we got to meet the owner, Diana, which was a treat. Thank you for such a wonderful day!

Gardener, quilter, author and a woman so early to university (Oxford...her brothers were at Cambridge and didn't want her at 'their' university) that she was only allowed to attend lectures with no hope of acquiring a degree...Lucy Boston...and it is her beautiful garden, quilts and literary, artistic and social legacy that live on in the competent hands of her remarkble daughter-in-law...who will probably be the one to show you around the house. Another aspect of this refreshing experience is real contact with the 12th C origins of the manor house...it's there in plain sight...loads of it...as are examples of building alterations and 'renovations' over the centuries!! Our tour leader was appropriately scathing of some of the, "...dreadfully untidy work of the Elizabethan builders"...ours is not the only era that can mindlessly damage. The quilts are outstanding. Lovely to access the river through the garden gate...the stuff of dreams...but all enough to wake up even the most somnolent of visitors.