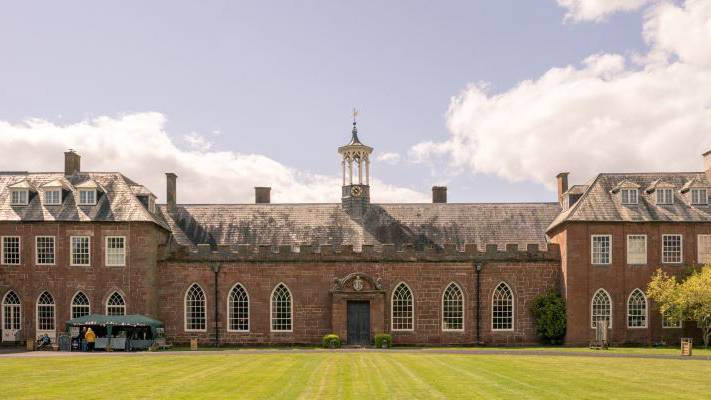 Hartlebury Castle from the front by Geni. CC-BY-SA 4.0

Hartlebury Castle was the home of the Bishops of Worcester from 855 to 2007. Three of our bishops became saints, two were burned at the stake for their faith, one became the Pope who refused Henry the VIII his divorce and another was present at the execution of Mary Queen of Scots. They have amazing stories to tell and their history and that of Hartlebury Castle is inextricably linked with the history of the nation.

However, in 2007 there was a risk that all that history could be lost. The Bishop’s home was moved to Worcester and there was talk that the Castle and its surrounding land could be sold for development. Hartlebury Castle Preservation Trust was formed to prevent that.

The trust is a charity formed to preserve for the benefit of the people, Worcestershire and of the Nation Hartlebury Castle, its gardens, grounds, parkland and historic contents including the Hurd Library.

With the help of a £5m grant from the Heritage Lottery Fund the Trust purchased the Castle in 2014 and carried out renovations to open it as a visitor attraction in April 2018. We have been supported by our colleagues at the County Museum which has leased part of the site since the 1960s and in the first year over 20,000 visitors came to learn about our history and to enjoy the beautiful grounds.

The challenge of purchasing and renovating the Castle was huge. But the fact that it is now open to visitors does not mean it is “saved”. We are of course immensely grateful to the National Lottery and to all our other funders for their contribution to the visitor attraction you see today. But for the Castle to be truly “saved” it needs to be self-sufficient, generating enough annual income to cover the substantial costs of maintaining and running it.

When you visit Hartlebury Castle you are directly contributing to the charity which is fighting to preserve it. Hartlebury Castle Preservation Trust receives a proportion of your entry fees, and any money you spend in the shop or the café comes to us. We run events and workshops to generate income, and you can also hire parts of the Castle for weddings, parties or meetings. All of this helps us to keep the Castle open so that people can learn its fascinating history and enjoy its peaceful grounds. If you would like to help further, you can also donate either by text or cheque. Every penny goes towards maintaining and preserving this slice of history for future generations.

Yes - Dogs on leads. Dogs are welcome into the Grounds and Reception Building.Only Assistance dogs are allowed into the main Castle and outer buildings. Dogs are only allowed in the outdoor seating area of the café.

Yes - Children of all ages. The Castle is pushchair friendly or pushchairs can be left in the lobbies if you prefer. Please be aware our grounds walk includes steps.The Orchard Picnic Area and Carriage Circle can be used for your own picnics

A lovely place to visit, especially for children. The grounds are lovely to walk round, picnic tables located at many spots. Lots of wildlife to see together with a new bird hide.Various trails and items for kids to find and count. Inside the palace , the chapel is very pretty and some great interactive displays are located throughout. The museum in the opposite wing is also very interesting. It looks like a lot of work is going into developing the site further with the addition of new features. The guides and staff were all so friendly and knowledgeable and the cafe is well worth a visit, really nice food and coffee. Well worth a visit.

Looks like more house than castle. Interesting museum and lifetime of Church servants. If you wish to show kids last centuries life timeline is a good place to do it. Each room has interactive video tours, an excellent way to learn and enjoy the tour. Some parts of the Mobile museum were closed. Cafe and shop on site. Interior and art collection. Unexpected find.

Visited recently and spent longer there than we thought because there was so much to see and listen to via the audio stories. Really nice lady welcomed us and gave us some really insightful information. We then used the audio devices (recommend anybody use these) so we got to hear many of the stories about the history of the place which added even more to the visit. Recommended!

What a great place to visit & well worth the admission. Welcoming staff with history knowledge,a lovely shop,lots of Xmas trees & a lovely cafe with meals,sandwiches & cakes also not that pricey. There is also a very interesting museum in the winding corridors that we really enjoyed. There is a lovely walk around the property about 25 minutes to get around it. They have lots of events for Xmas & will keep an eye on 2023 events as would return. There are second hand books for sale in the kitchen £2 each

Took my wife for afternoon Tea on her birthday, lovely food and museum was really interesting especially the archeology section. Wasn't open full because of an antiques fair but returning again one week after to do the stately home and grounds. Well worth the buck.