Trachycera suavella is a species of snout moth, that was initially classified under the Numonia genera. From afar they appear plain brown, however, upon closer inspection it scales comprise a mixture of browns, greys, black and red. Like the hawthorn webber moth, these insects are also concentrated towards the south of England. Its larvae are active early spring, which mine the stems of the host plant. The larvae then spin dense grey-white tubed webs, incorporating fragments of plant matter and excrement. They mostly prefer blackthorn, but can be found infesting cotoneaster plants. Webbing tends to be most prominent late spring following the rise of overwintering larvae.
Free download for your phone or tablet

Larvae spin extensive webbing over the foliage of host plants, causing leaves to brown and fall off.

Damage is not long-lasting, with most plants recovering without any need for treatment.

Adult moths are small with a wingspan only reaching nearly 3cm. Their wings are mainly mottled brown, however, on closer inspection wing colouration incorporates reds, greys and black. Larvae are miners and can be difficult to see. Once fully grown, larvae break from the mined leaf and spin dense web tubes that cover whole branches of trees. Incorporated within these webbed tunnels are excrement and dead leaves. Within these communally spun webs, they continue to feed further on the leaves of plants before pupating. Larvae appear like small and stout black caterpillars (2cm) which overwinter as young larvae. There are other species of moth that spin similar webs to the hawthorn moth, however, these do not infest cotoneaster. Other species that produce similar webs in trees are the box tree moth, browntail moth and the ermine moths.

Keep an eye on plants throughout the year. If the webbing is restricted to new growth it can be pruned out.

There are both organic and more persistent chemicals available on the market. It's advised to attempt all biological and organic treatments before moving on to persistent chemicals. Please read label bottles thoroughly and avoid spraying during flowering periods. Many chemical treatments are non-specific, so can indirectly harm other wildlife. Treatments must be applied thoroughly to penetrate the dense webbing. 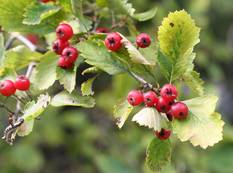 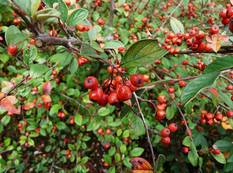